[dropcap]O[/dropcap]n Saturday night, I travelled to a galaxy far, far away…via Canada Water. Don’t worry, that’s as much as I’ll reveal! This years Secret Cinema shindig is Star Wars: The Empire Strikes Back aka The Greatest Project Secret Cinema Have Ever Made. Many have criticised the ticket price at £75, but after last night, it was greatly justified and then some. Last year we went to the Back to The Future show and loved it; I just couldn’t imagine how it could be beat. Well, now I do!

For some glitchy reason, we weren’t emailed the location of where to go on the day itself. After some digging around on Instagram and Facebook we worked out that we needed to head to Canada Water where we would be directed to the actual venue which is about a 5 minute walk away.

Then there’s the matter of fancy dress and a new identity. Weeks ago, after we had purchased the tickets to the event, we were emailed a link and a code that enabled you to access Rebel X online- the idea being that everyone attending the event is a rebel against the Empire. From the link, answer some questions and you are given an identity. For one night only, my name was…

…Wyla Adas and I worked for the Creative Council which I worked out meant I was a Jedi. FIST PUMP! Once you’ve got an identity there are links and an online shop to help you put together your costume for the evening- a Rebel X pop up store has even opened up on Cheshire Street off Brick Lane if you want to have a browse and buy stuff in person.

Here are some practical tips to help you on your own Star Wars experience:

1) Costumes– totally up to you if you want to dress up, however about 90% of the people I saw last night were in costume. Most people did the minimal and wore their colour coded scarves, even the ones that came in their ‘Earth’ clothes. As a member of the Creative Council, I could have worn a full length robe and boots, however it was SO hot on Saturday that I ditched the robe and swapped the boots for a pair of sandals. Basically, I was just in jeans and a t-shirt (and it was fine!) These are screen grabs from my Snapchat from when I was going through my costume. 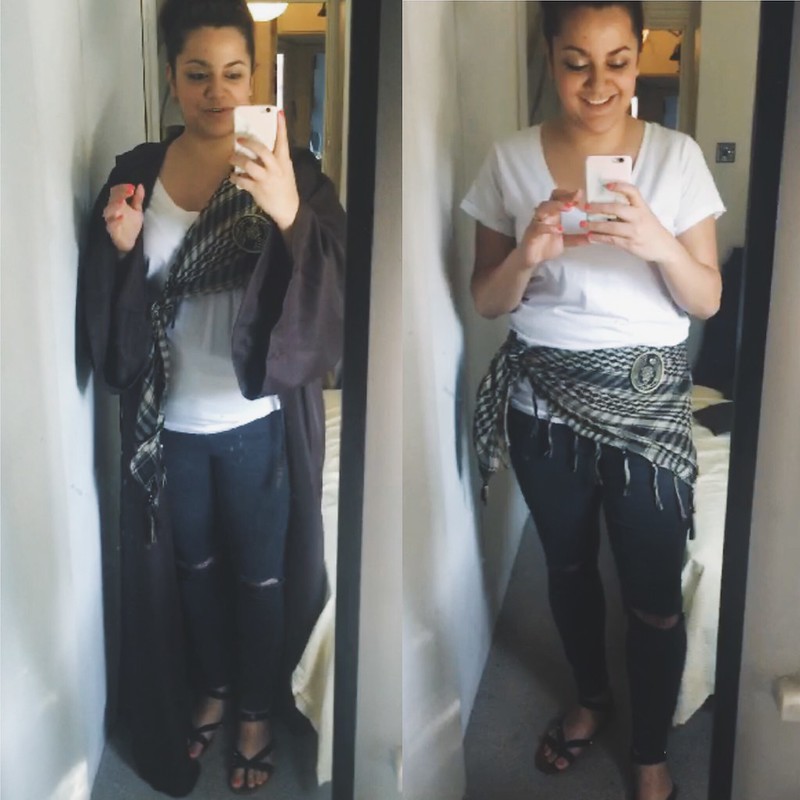 2) Bring your debit or credit card- this is the first event I’ve been to where it has been Card Only. There are food and drink areas and you can also use Contactless payment to buy things. It was really convenient and quick and meant you didn’t have to do that annoying last minute search for a cash machine beforehand!

3) Don’t be afraid to explore- some of the best fun we had was accidental just by exploring our surroundings.

4) When it’s time to watch the movie, grab a seat near the front of the screens- with this many people at one time, there are three. Being Secret Cinema, there’s always something entertaining to watch as the movie happens. Don’t get food, bypass the drinks stands, and just get a seat first! You can always get up and get what you need or run to the loo during the film.

5) Just Go With It! If at any time you find yourself thinking ‘what is going on’ just go with the flow. Trust me on this.

6) Phones. Unlike last year’s Back to the Future show, there was no where to stash your phone during the event. This year, you place them into a sealed bag and you can just stash it into your bag. Also, unlike Back to The Future, there were no disposable cameras on site, which is a bit of a tiny shame, but meant there was zero distraction and we just got to enjoy ourselves in the moment. Plus, no photos on Instagram spoiling it for others!

It was just so much fun last night and worth every single penny. As I was washing my hands in the restroom that night, one girl was almost in tears of joy about the things she had seen. We got really caught up in the event; without a phone to check, or even a watch, we had no idea what time it was and just enjoyed ourselves. There are still tickets available to buy from the Secret Cinema website. If you can, go– it runs until the 27th September. You won’t regret a second of it!

Rebel X, With You!