[dropcap]T[/dropcap]his was my first year going to the Taste of London food festival and I’m hitting myself for missing out on previous years. It was amazing. So much good food! So much good drink! It was carnival time for my belly. I went on the last day of the festival, and it did not disappoint. Ismay and I did a great job of sampling dishes from all the restaurants. I mean, talk about taking one for the team. A quick stroll through Regent’s Park, we exchanged money for a booklet of crowns (1 Crown= £1) and began our culinary journey at Barbecoa… 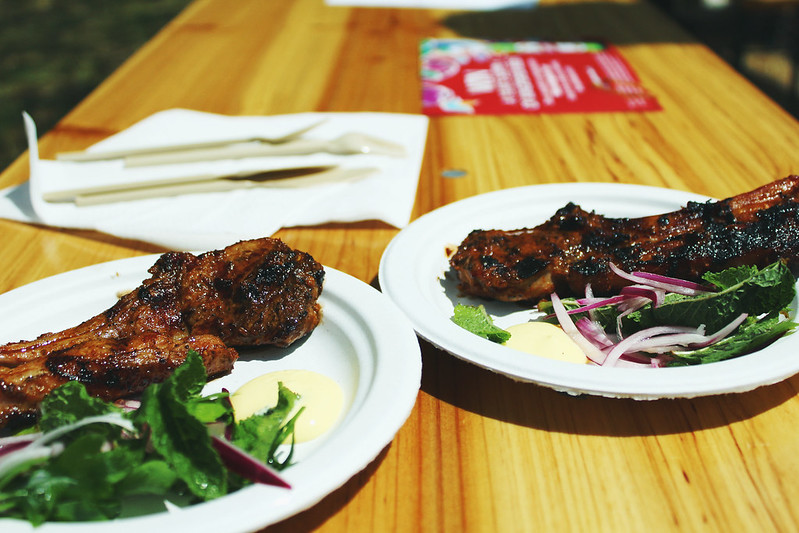 Each restaurant at Taste features an Icon item on their menu, and in Barbecoa’s case, we had their Barbecued Vindaloo Lamb Chops with a little side of saffron yogurt.

Tender, full of flavour with that delicious spicy, smoky barbecue taste- it was a great starter to ease into the day. Oh, and I couldn’t leave without sampling their Salted Peanut Butter Cheesecake mixed with vanilla infused black cherries *deep breath* and topped with a whisp of sour cherry candy floss. How that dessert alone wasn’t an Icon item, I don’t know! 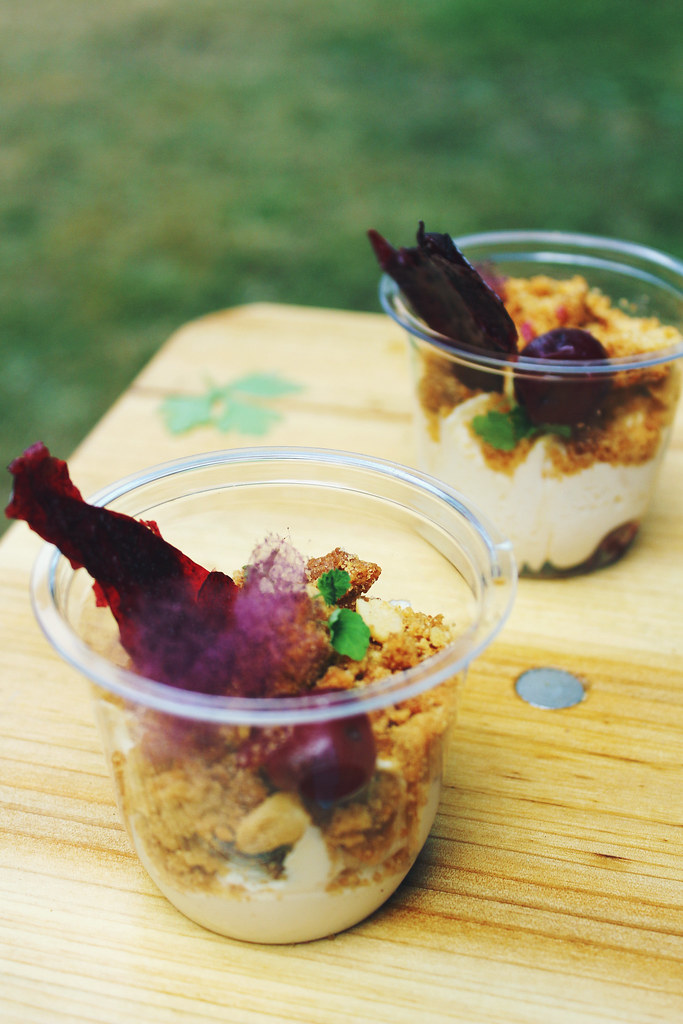 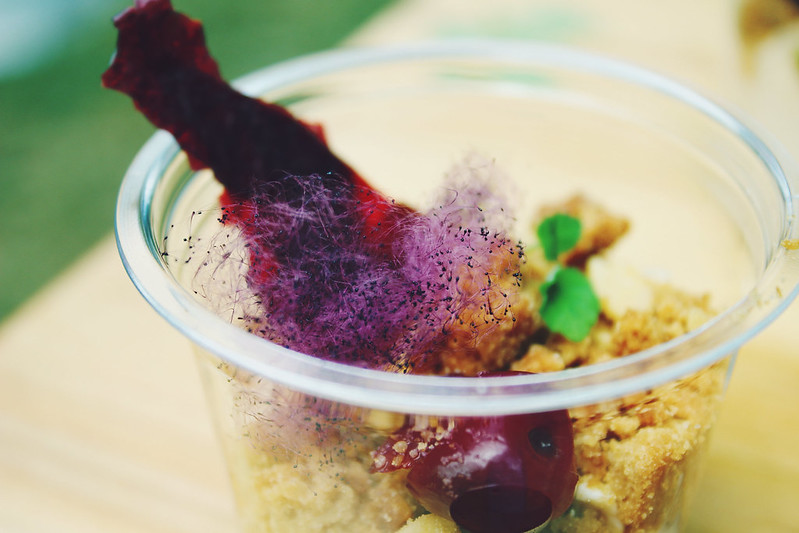 It was so incredibly good- neither flavour overpowered the other. It was perfectly peanutty, creamy and the black cherries were a lovely injection of sweetness to the mix. 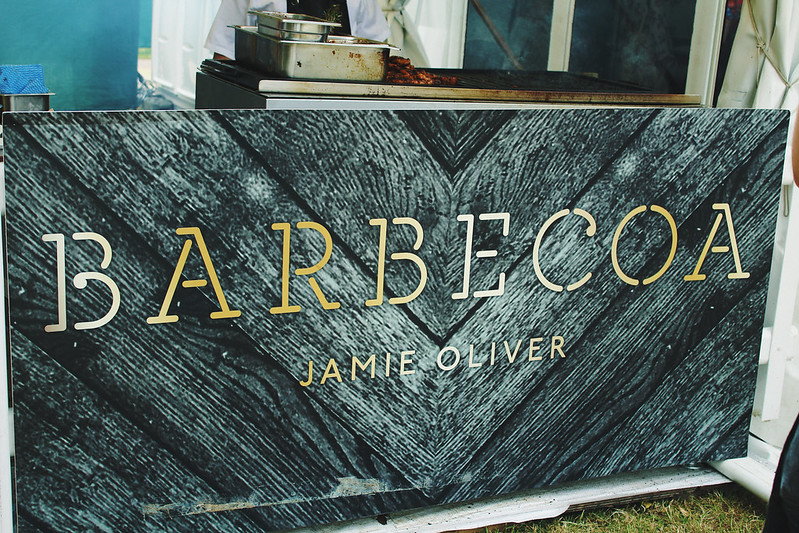 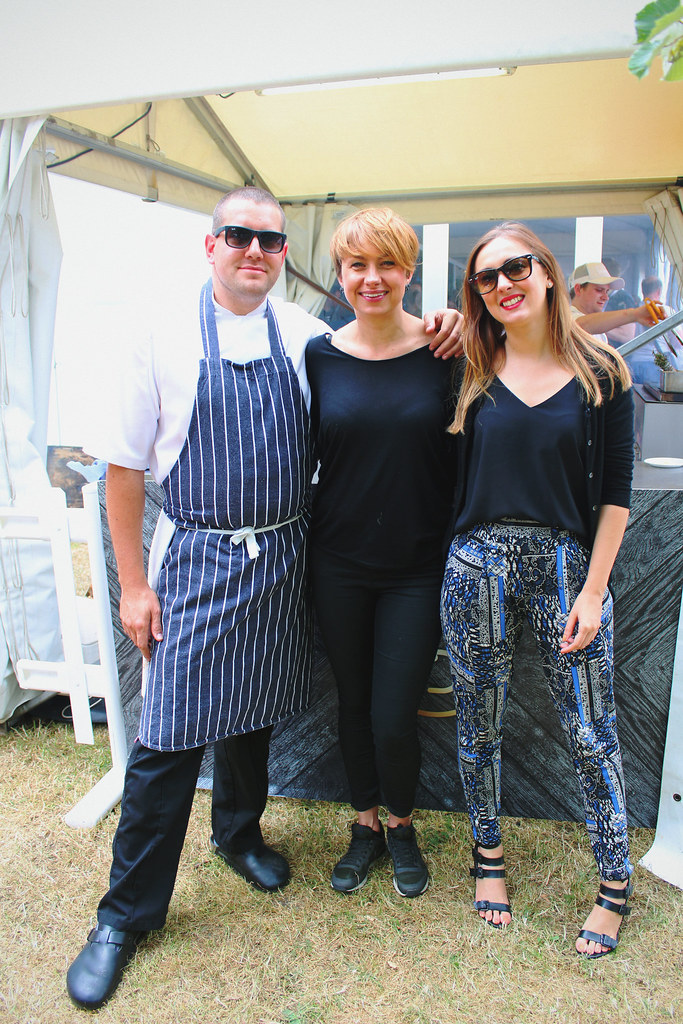 Barbecoa is a Jamie Oliver creation and the restaurant itself is based in St Paul’s, overlooking the cathedral. They specialise in ‘fire-based’ cooking- and it’s really good. David Bargione, the Chef Director with the Blues Brothers sunglasses here, quoted to Taste that “I’m a bloody good chef” I can vouch, that yes, he is.

Our tasting continued with… 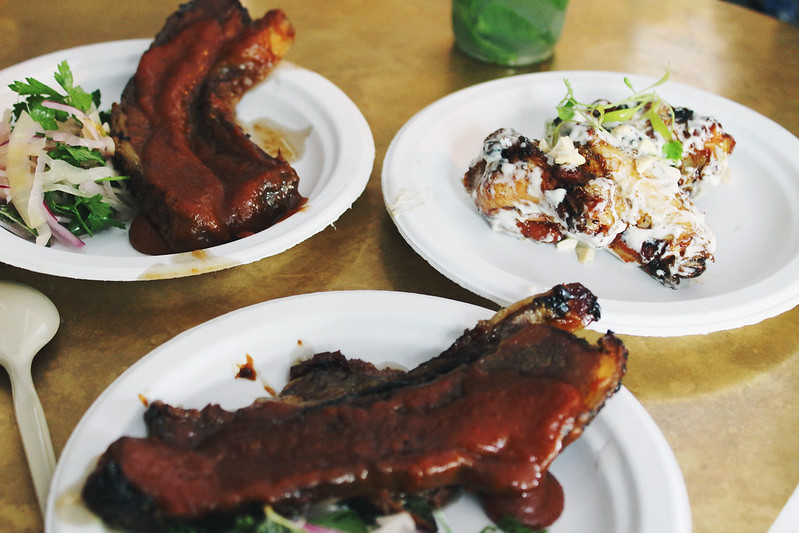 …Slow Roasted Pit Beef, which just fell apart as the fork brushed against it, and the Smokey and Fried Wings with white BBQ sauce. You can’t have a barbecue without some chicken wings! Every cut of meat at Barbecoa is hand chosen and aged for at least 70 days in-house. I watched as a juicy piece of 120 day aged slab of prime rib was placed on the grill to serve up later- magic. 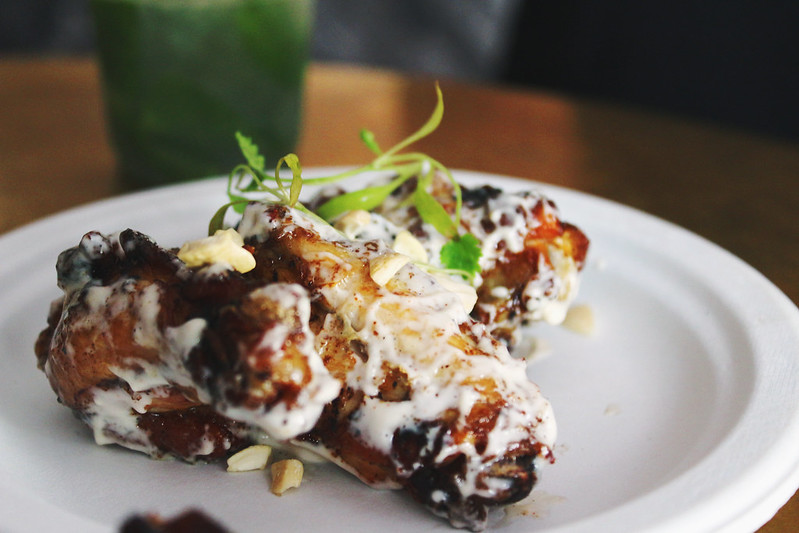 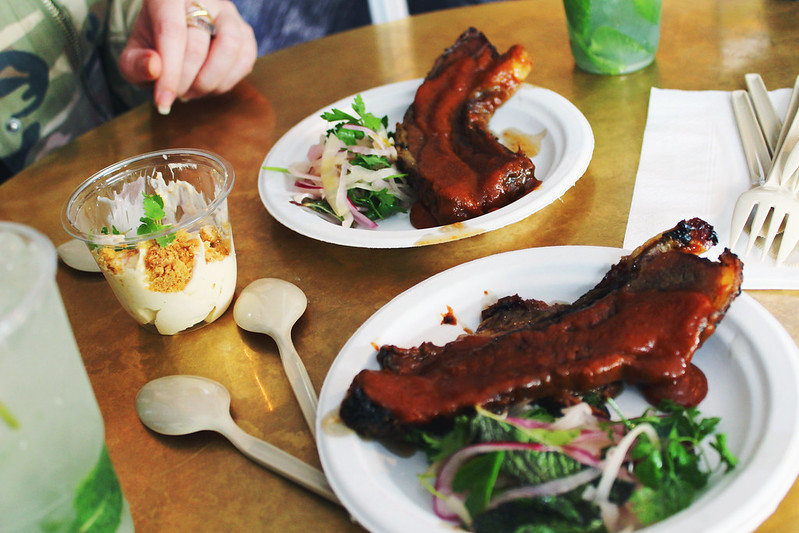 Reluctantly leaving Barbecoa behind, we took our map of the site and went off to explore the rest of the festival. 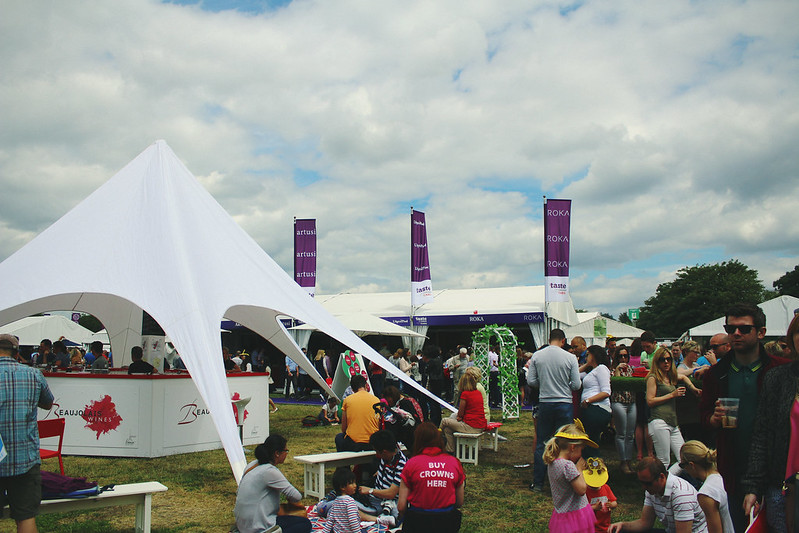 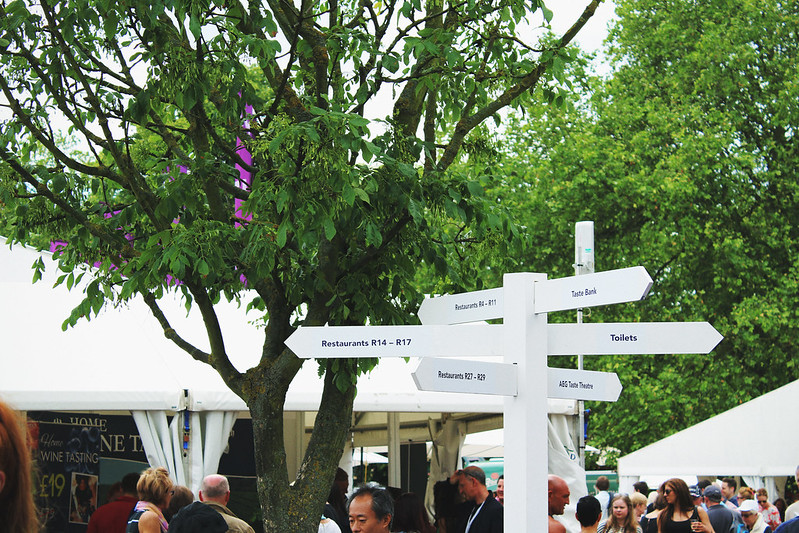 Many of our friends recommended that we head to Theo Randall at The InterContinental to try their much raved about Sorbetto di Pesca, or peach sorbet (but doesn’t the Italian version sound so much better?!) 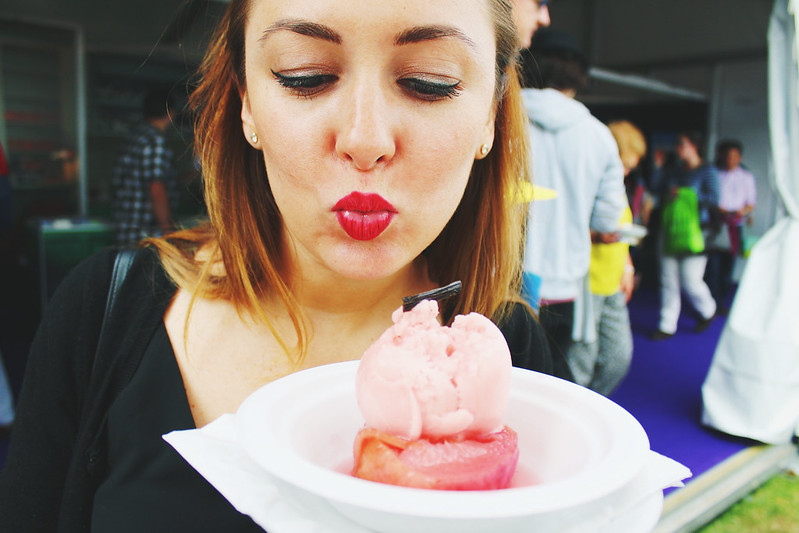 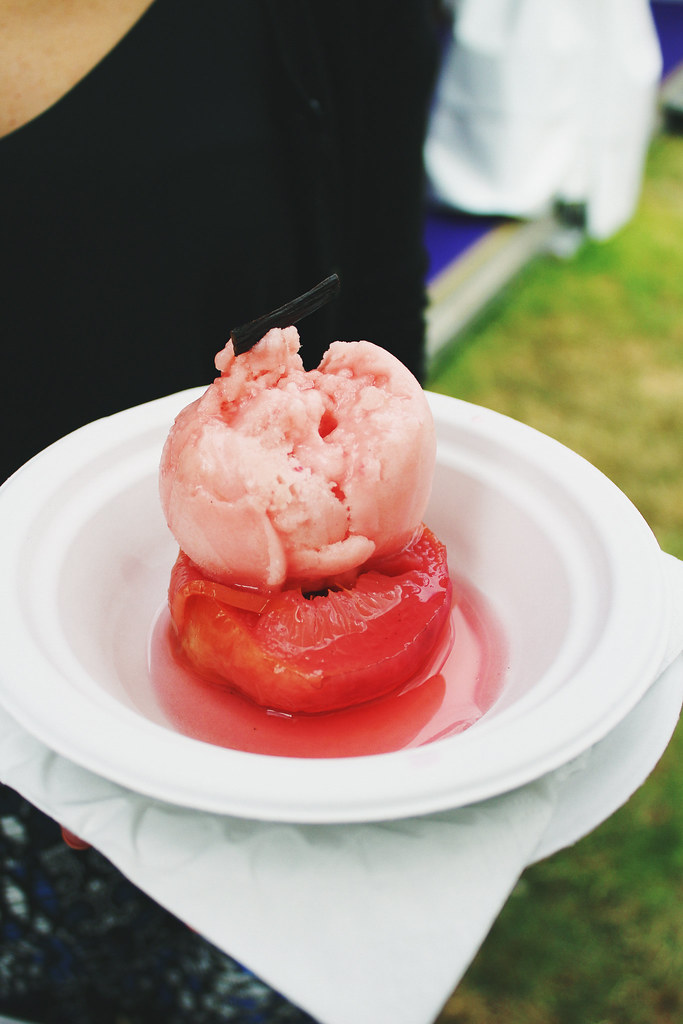 At only 4 crowns, this dish blew me away for it’s value. A generous fat scoop of peach sorbet perched on top of half a baked white peach, glazed in syrup. It was amazing- the sorbet was light and fruity, the peach was juicy and sweet and together they were just the perfect Summer time dessert. I loved this!

Theo Randall at the InterContinental is one of the city’s highest ranking Italian restaurants and their menu is dictated by whatever is currently in season. The queue for their stand was huge and since sampling this dish, I’ve had peaches on the brain.

Next, I was keen to try something at Spice Market, as executive chef Peter Lloyd used to work at Suka at The Sanderson Hotel and is a champion of South East Asian cooking, which of course, is very close to my heart! 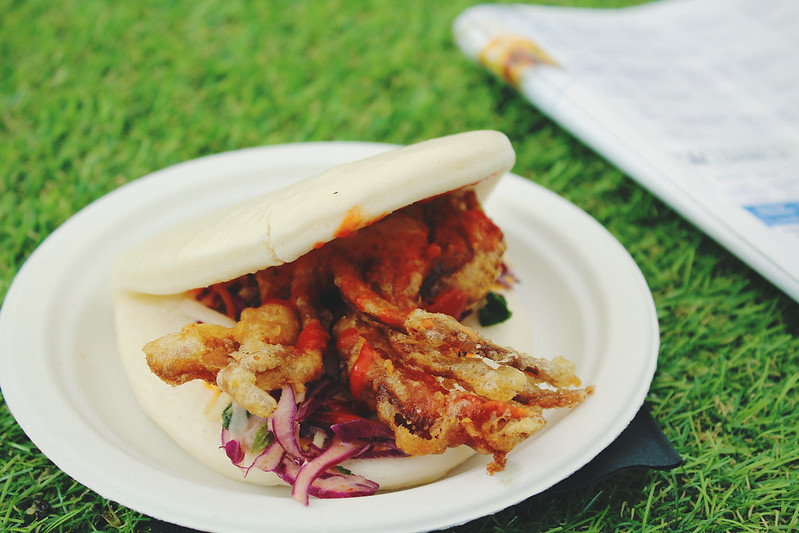 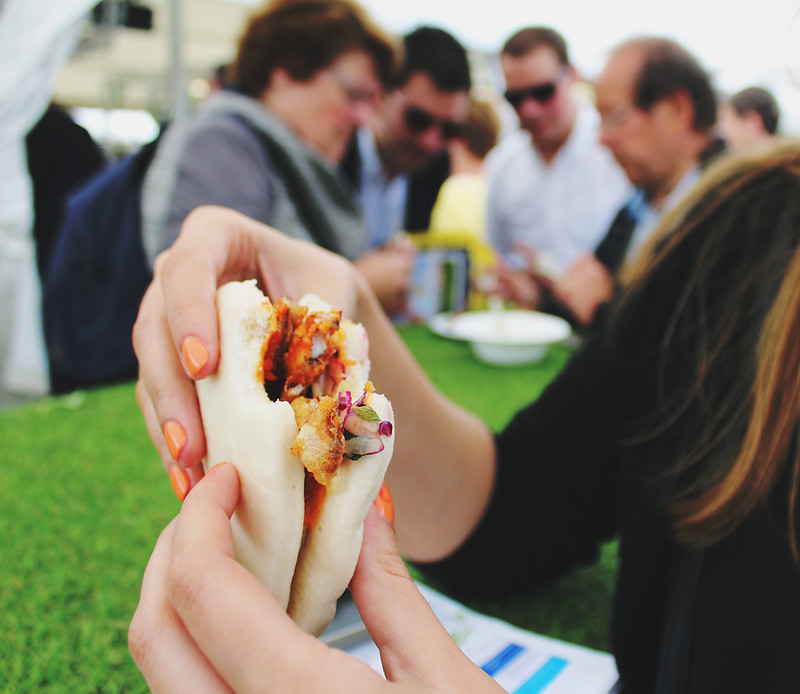 Steamed buns have just crept up on the London food scene, and I am so glad they have- they are pillowy, soft little buns of heaven. I really liked this dish- the saltiness of the soft shell crab and the sweetness from the chilli sauce made this one of the best sandwiches I’ve ever had. In fact, I would like all my sandwiches from now on, served in a steam bun, thanks.

Our next stop was Kurobuta.

Ever since I had dinner at Joe’s Oriental Diner, I have become a big fan of Scott Hallsworth, and I was excited to try a dish from the restaurant. 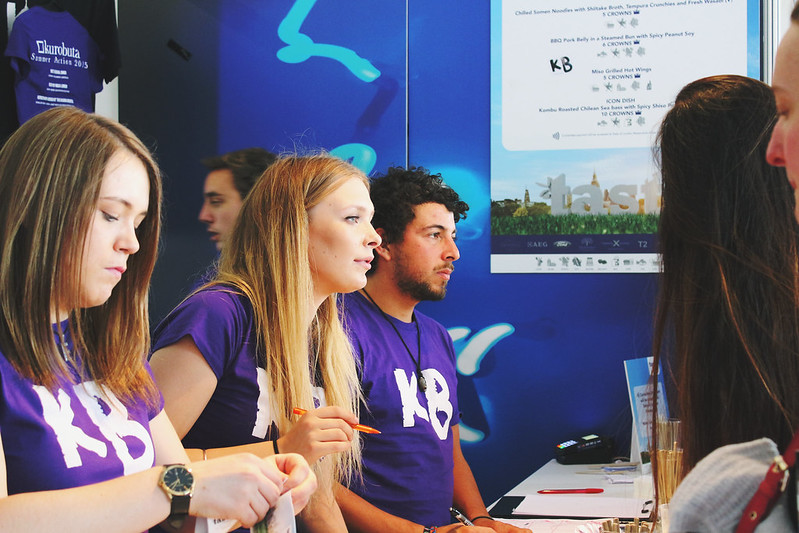 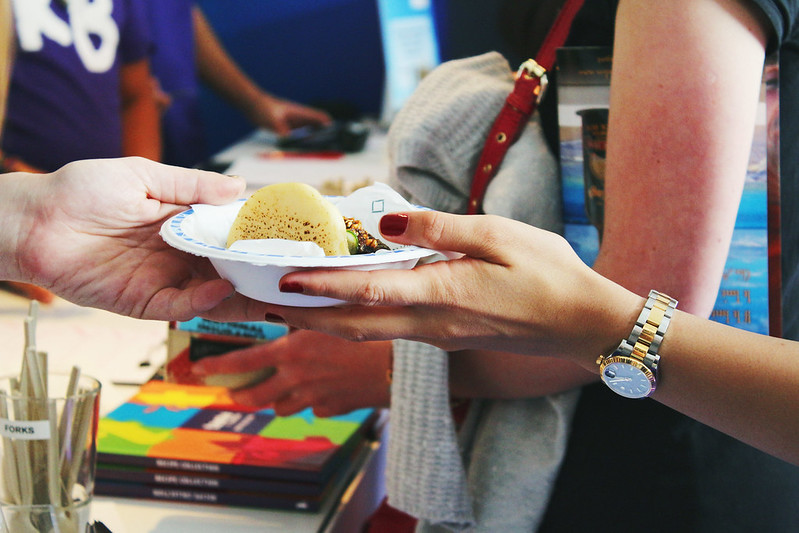 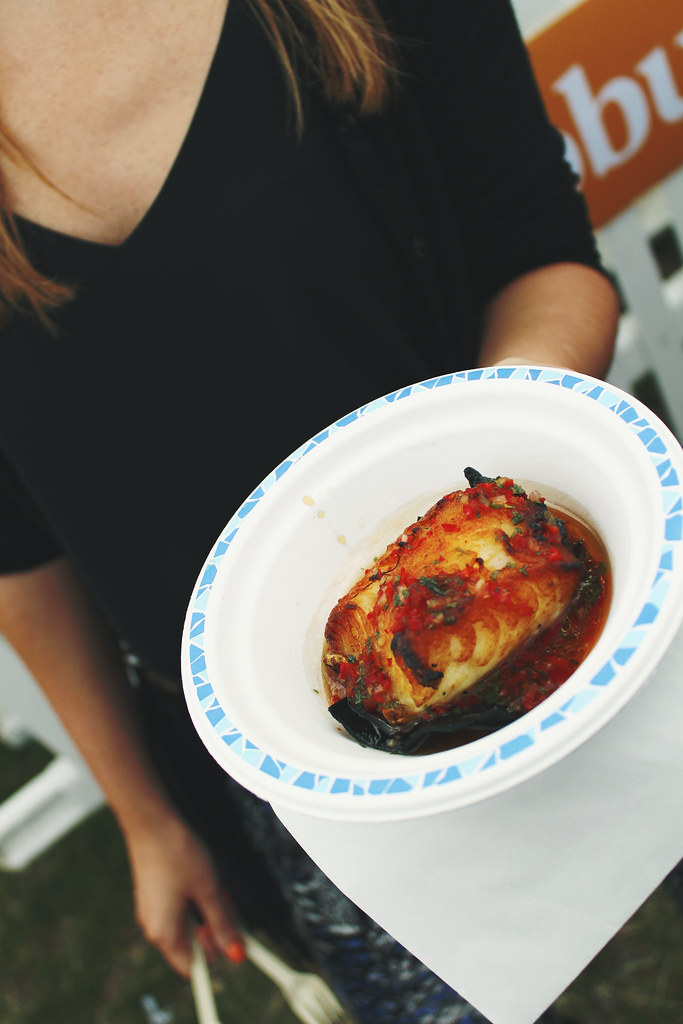 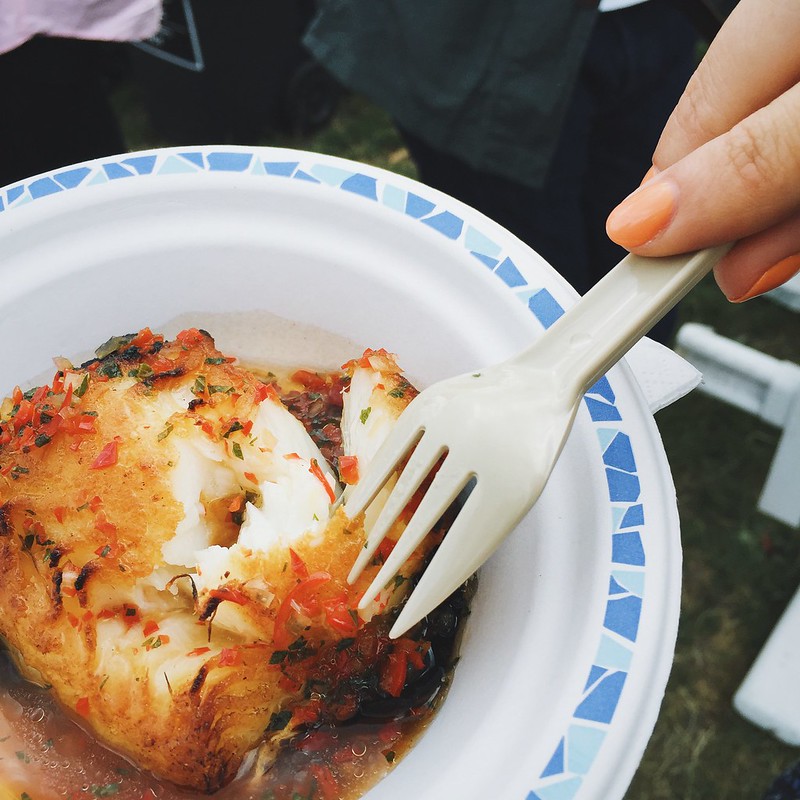 Call it whatever fancy name you want Scott Hallsworth, but you are raiding all the flavours from my Mother’s kitchen. This was out of this world!

Sushisamba and Duck & Waffle shared a stand, so we got a dish from each place… 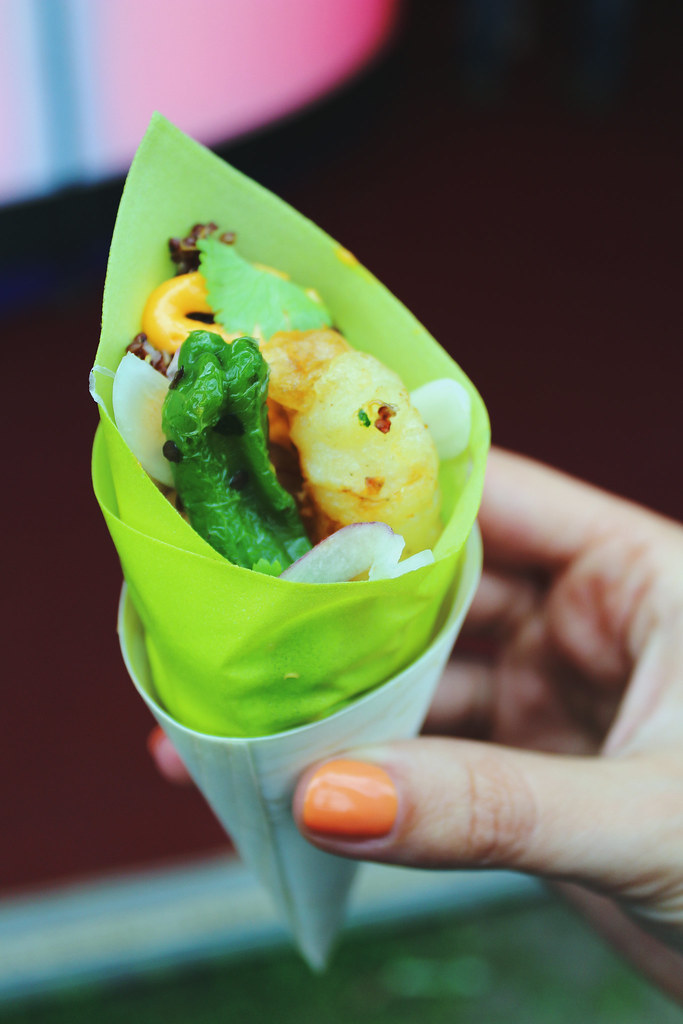 This is the Shrimp tempura, quinoa, shishito with spicy mayo in a delicate rice papery wrap. It was so unique- I would never have thought to pair tempura and quinoa together, but the flavours really worked and the result was delicious.

Ismay popped to Duck & Waffle and came out with these… 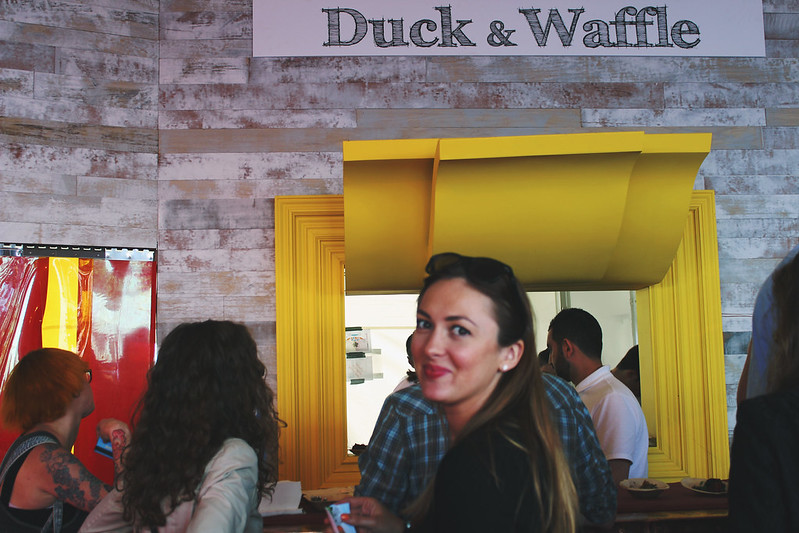 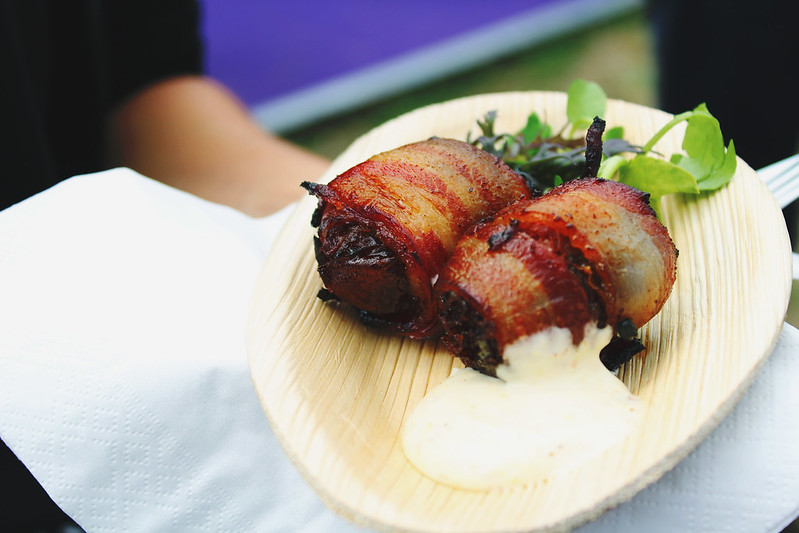 …bacon wrapped dates with linguica and manchego. She raved about them, so they must have been a good pick! 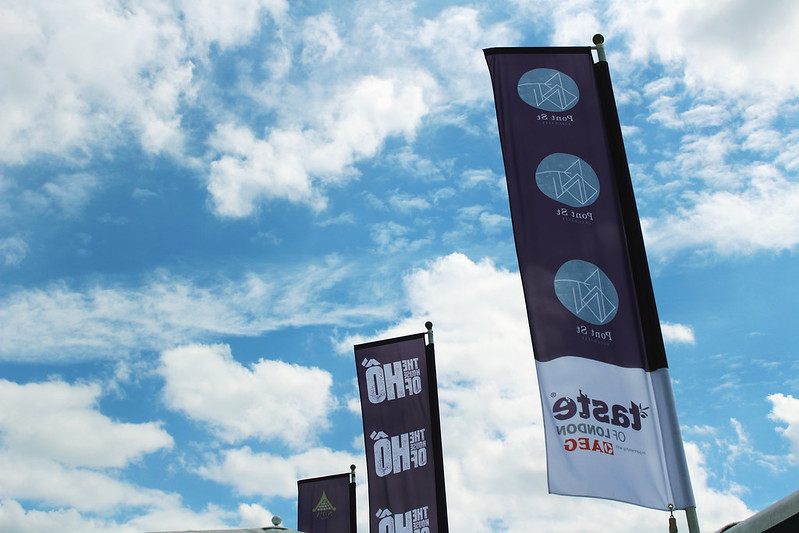 Our final stop was at Bluebird Chelsea for their Lobster Mac n Cheese- I don’t know anyone else as obsessed with mac n cheese than Ismay. 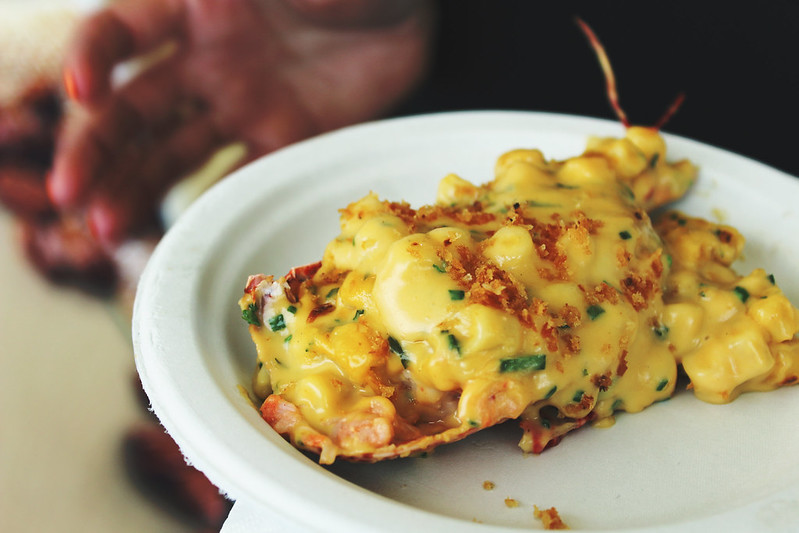 It looked great, and the chunks of lobster were pretty generous, but neither of us could place what the aftertaste was in the sauce. I thought it was almost fennel like? I’m glad we tried it though, it looked really impressive served in its half shell and was the fanciest mac and cheese I’ve ever tried.

…and then after all that good eating, it was time to find a shady spot and rest our weary bellies at Mahiki. 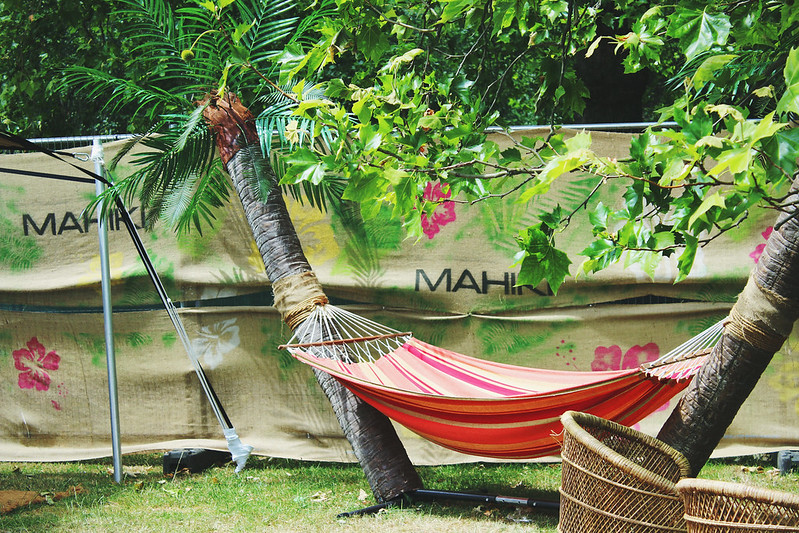 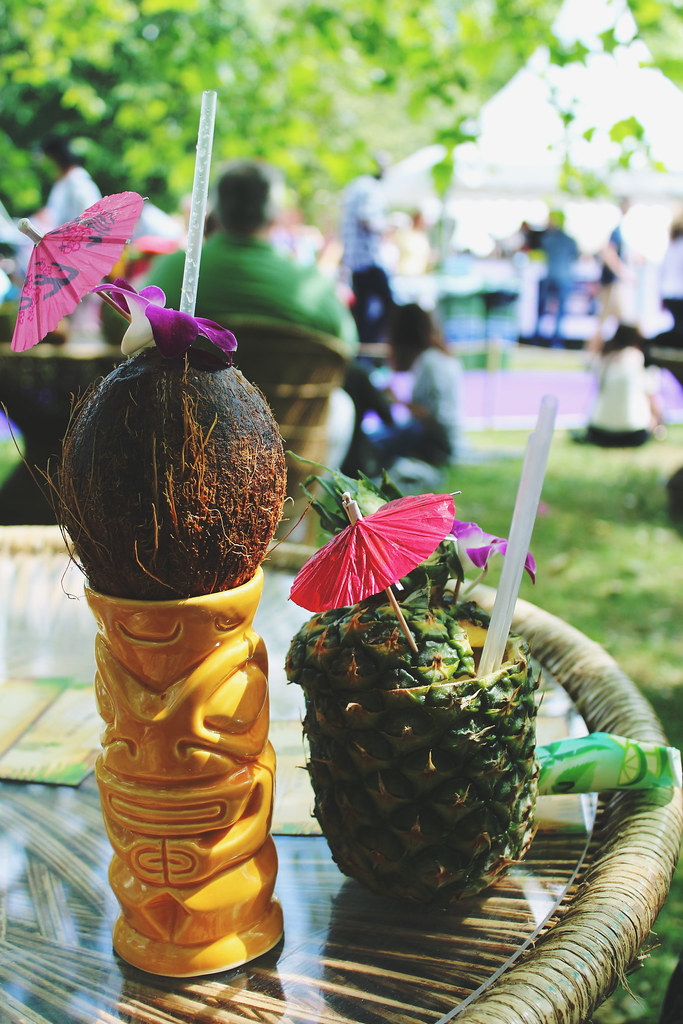 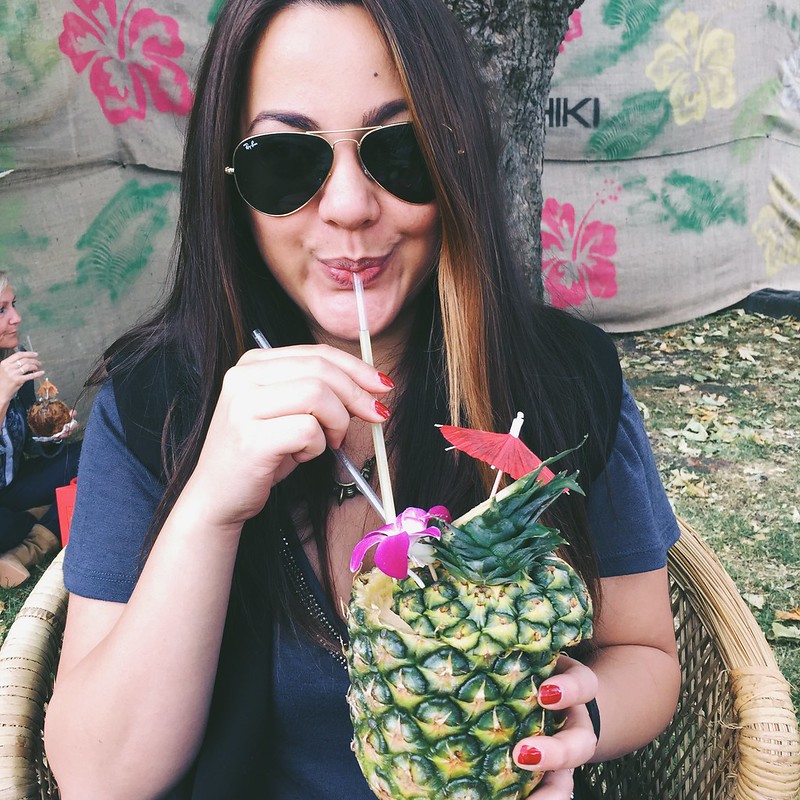 We had such amazing hospitality at Mahiki- it’s no wonder they’re as well known as they are- we were so looked after. Their Pina Coladas came served in pineapples- pineapples– and I spent a breezy moment sipping a mojito from a coconut shell. And then a pineapple. And then a Mojito ice lolly- which coined the phrase getting lollied which I hope is a summer repeat! 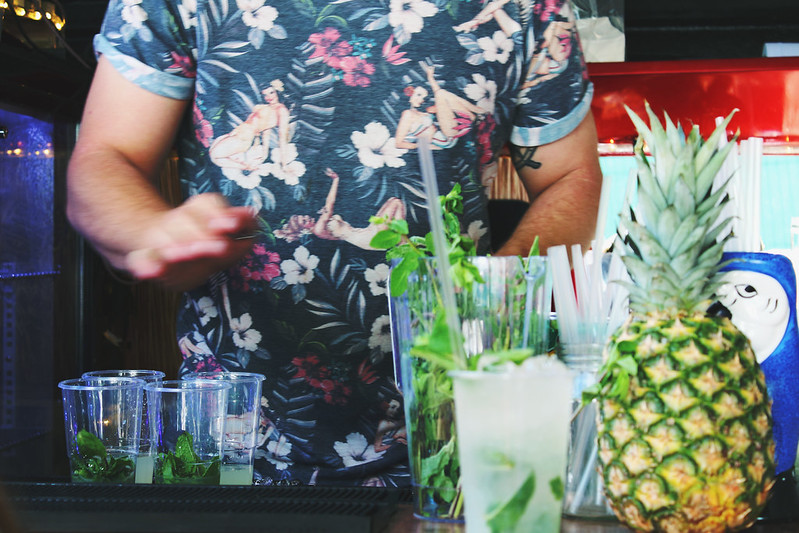 I had such a wonderful time at Taste of London- I’m a complete convert. It’s a good way to sample dishes from restaurants you haven’t yet been to yet to get an idea of their dishes, and there’s plenty of places to sit down and grab a drink in the sunshine.  It was just a really nice way to spend the day to be honest. I would set aside about £30 for a booklet of crowns as between us, we ate plenty and I certainly didn’t need any dinner that evening.

So if, like me, you had only considered going, take it from me now, that you need to go- it’s a foodie’s paradise!

10 thoughts on “Taste of London festival”