[dropcap]I[/dropcap]t’s been nearly two months since our new bathroom was finally completed and I’ve just accepted that it’s going to take me awhile to get the picture frames and hooks sorted out for it. So, I’ve jumped the gun a tiny bit and here’s the show and tell post, if you like!

Our bathroom is an awkward shape, so it took awhile to pick all the different fixtures. Naively, I thought the worst of the work would happen while we were away in Copenhagen, and OH HOW I LAUGH at this now. Here’s a pretty photo of it before and then during the gutting and tiling. 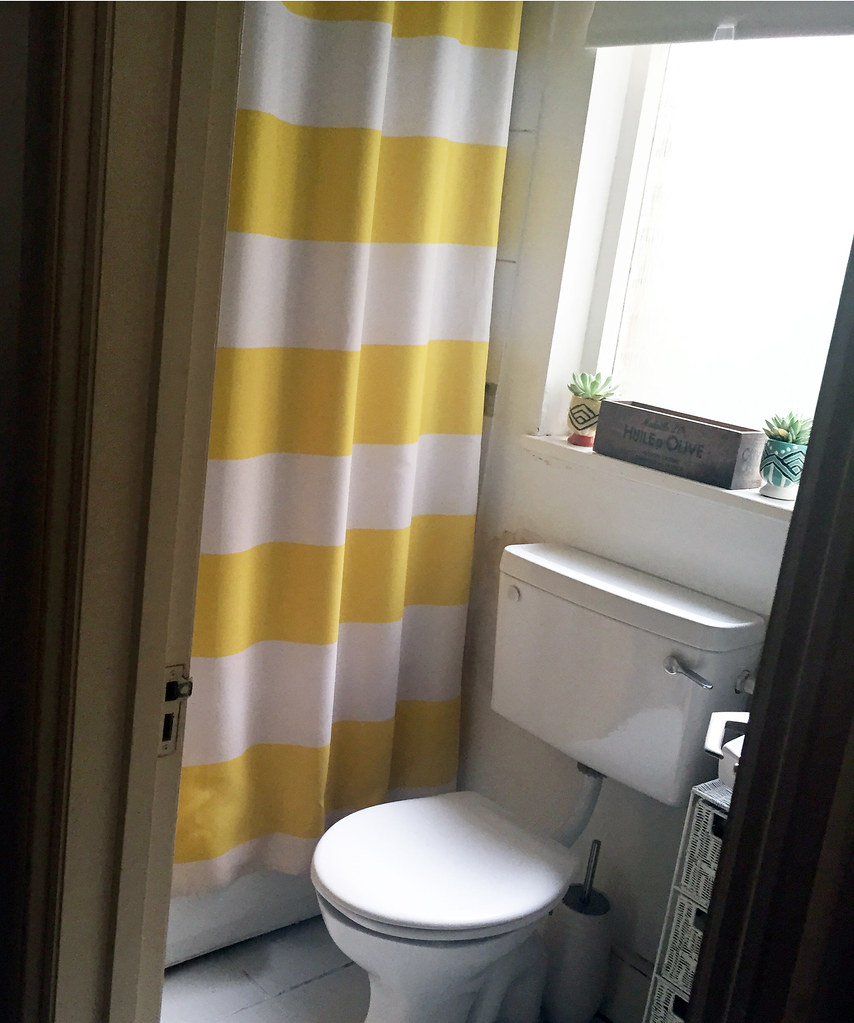 Behold the toilet from the past! The plaster patch on the wall! The floor tiles with terrible grout- I spent an afternoon colouring in the too dark grout with a white Ronseal pen that just didn’t stick. Behind the shower curtain were white square tiles with a mosaic border in the middle that looked like it had given up in life. It was all just a badly lit and sad affair.

Everything was ripped out- this photo looks like a mess but it makes me sing. The new room was on it’s way! 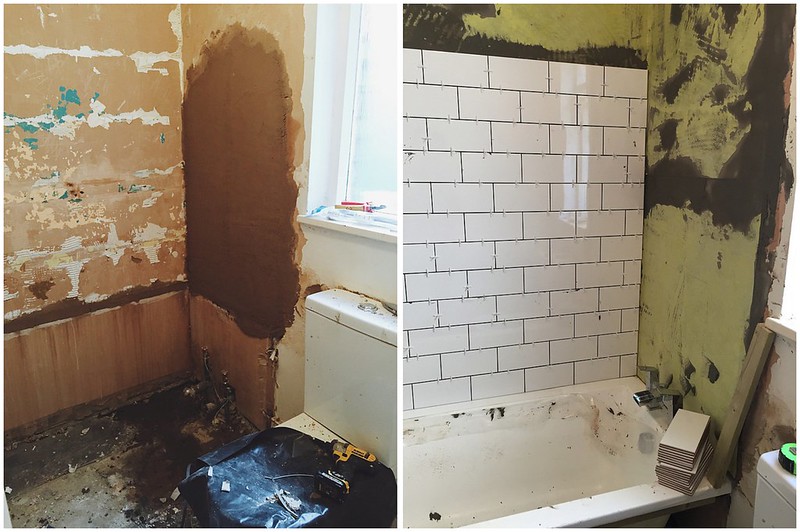 To the right as you walked in, the awkward shelf on the wall prevented the door from opening all the way. Oh, that shelf. Many funny bones and heads were bumped aplenty on that shelf. But since there was no other means of storage, I had to make peace with it.

For two days we had to use a wobbly loo so that was Fun with a capital F.

The old bathtub was old and chipped, the square tiles around it were snore-tastic (and seemingly immune to Cillit Bang) and no amount of scrubbing made it look clean or mould free. And whilst we’re on the subject of mould, I had to regrout the bathtub every few months to keep on top of it! I also went through a phase of finding the ‘perfect’ shower curtain in a sad attempt of cheering the space up.

Another fun fact, for two days we had to keep the plastic on inside the tub because the tile and grout work wasn’t finished (thanks to a late delivery) and I felt like a goldfish in a plastic bag. 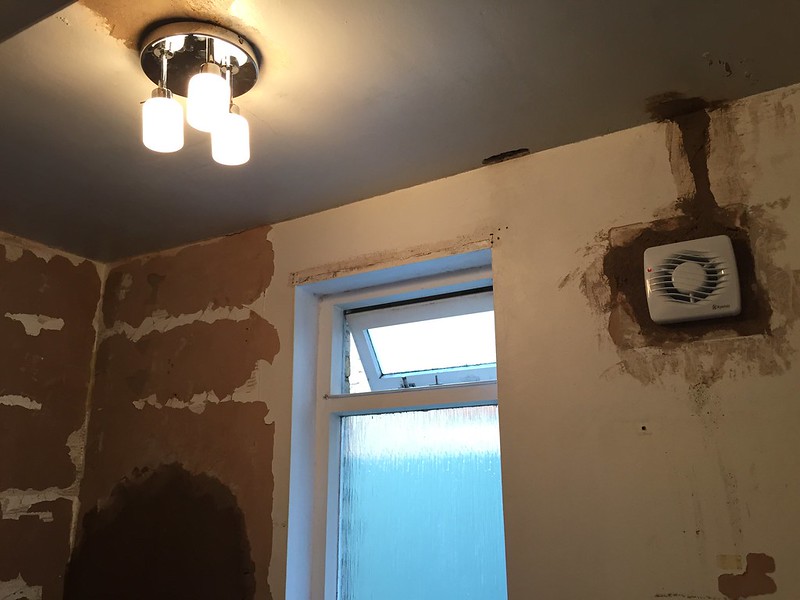 The damage to our ceiling from our neighbour’s leak upstairs meant that there was water damage to the light and the fitting which we had to have repaired and replaced.  There was also some damage to the wall under the window that needed replastering. We replaced them with these spotlights to maximise light in the small space and also fitted a new extractor fan to help with the ventilation. 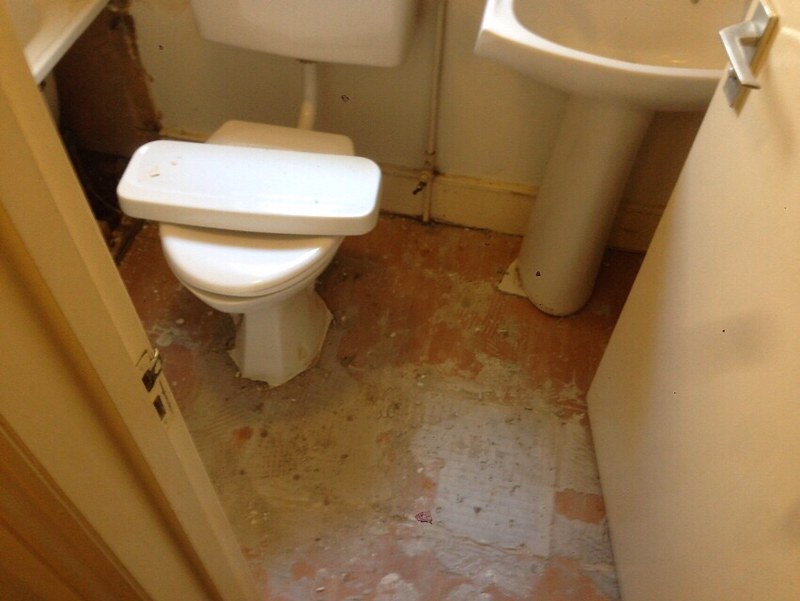 The old toilet probably hadn’t been replaced since the 1970’s and took up more space than it needed to- that was always the first on the list of things to go. The floor had been ripped out too. You can also spy the horrible skirting board that needed to go- bleurgh. 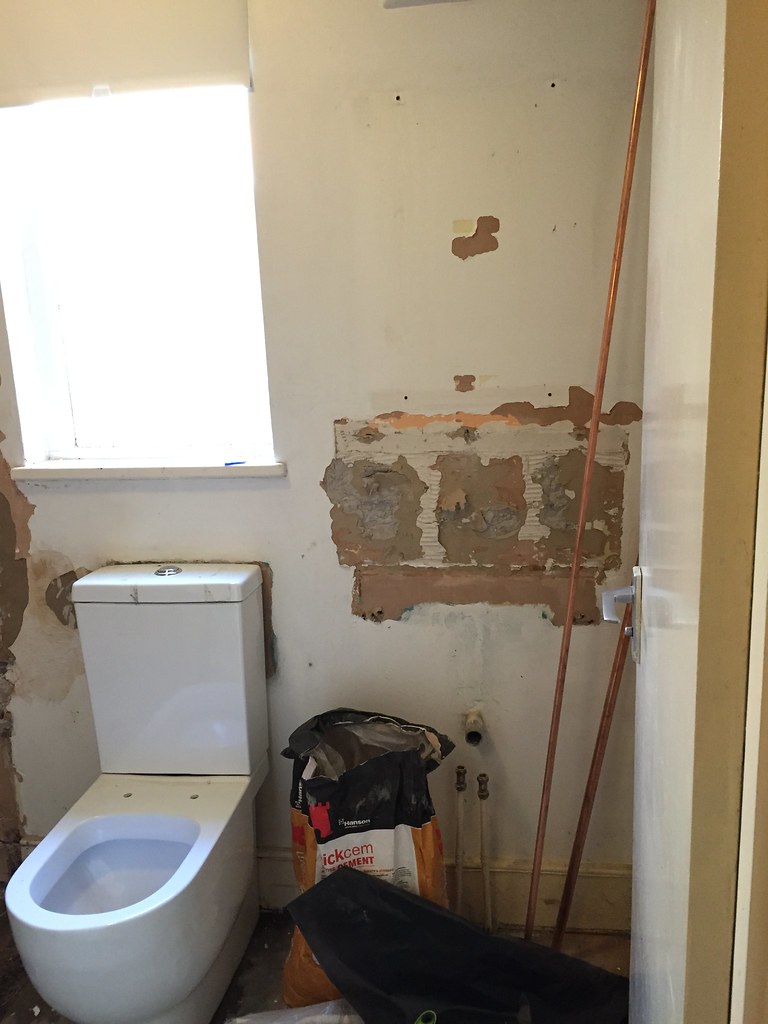 The new toilet pictured above fits back against the wall and has given us about 3 inches of extra space to move around in. It doesn’t sound like much, but it’s made a huge difference!

Our whole flat was taken over by building dust and tools for over a week. The Monica Gellar in me just had to let it go and just be…but this, really made me itch! 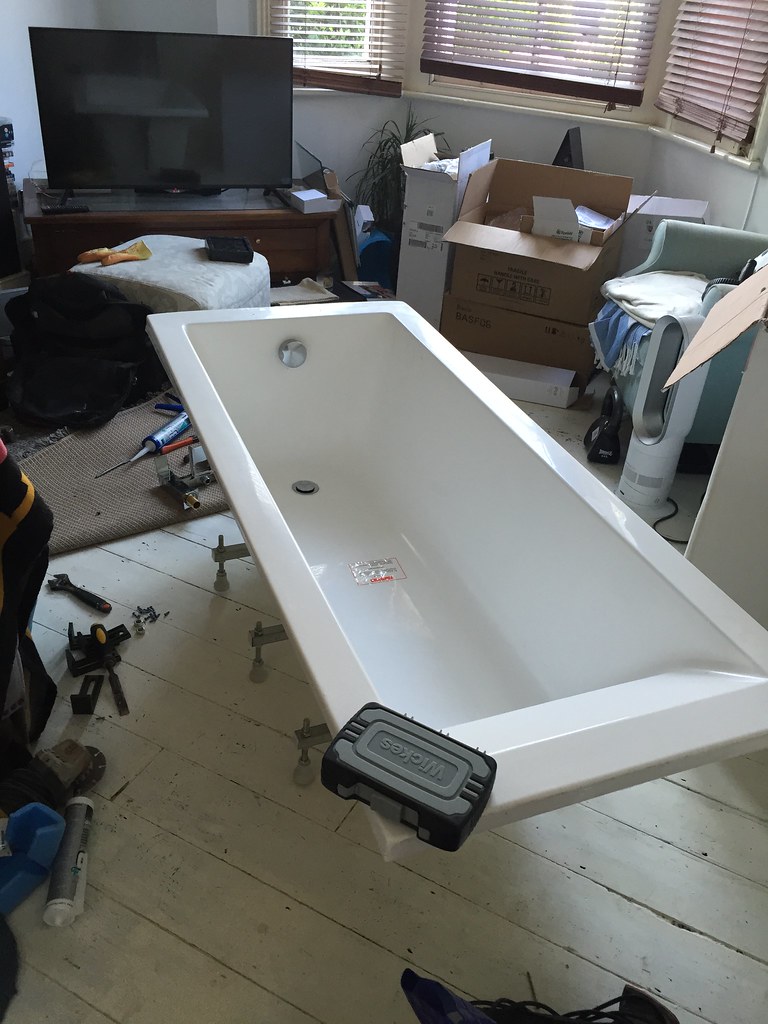 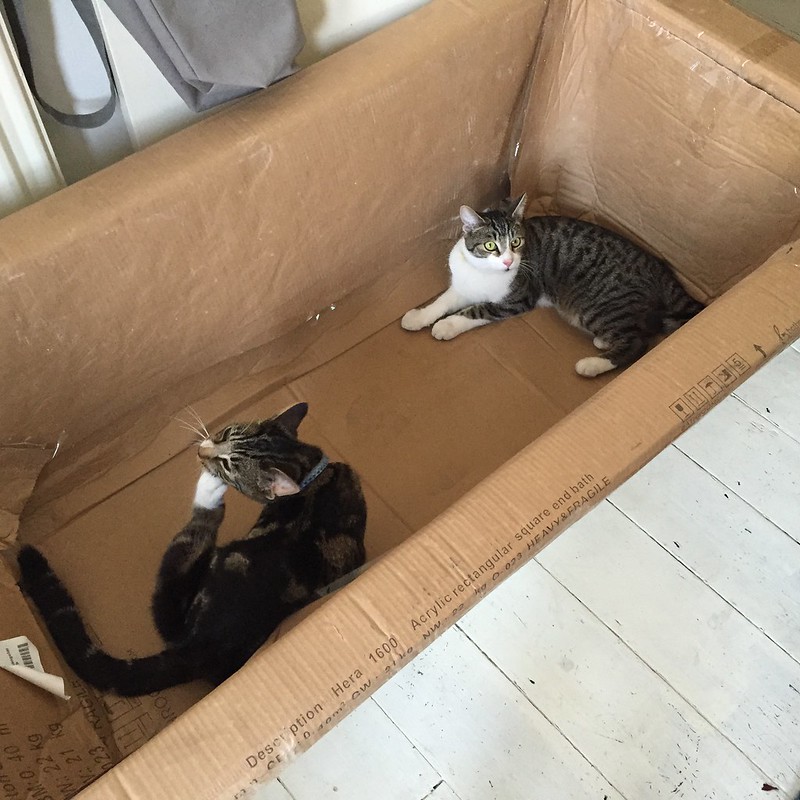 …although some didn’t mind at all. 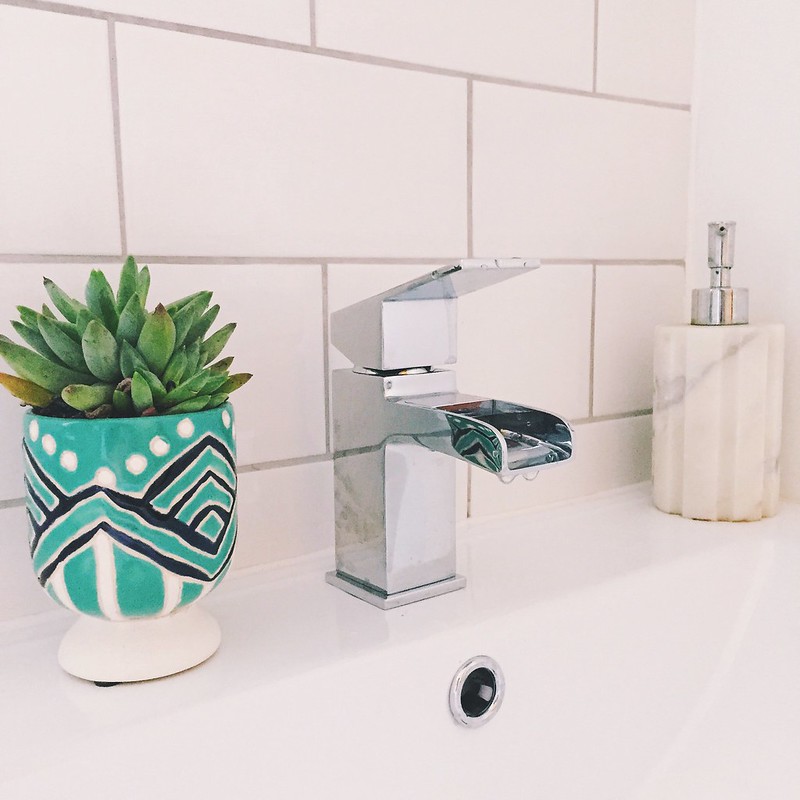 And here’s our new made over bathroom! 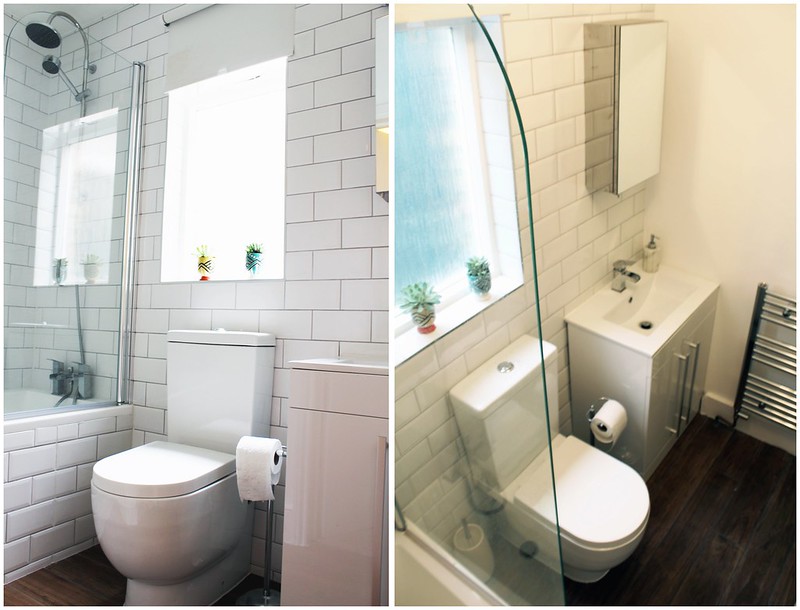 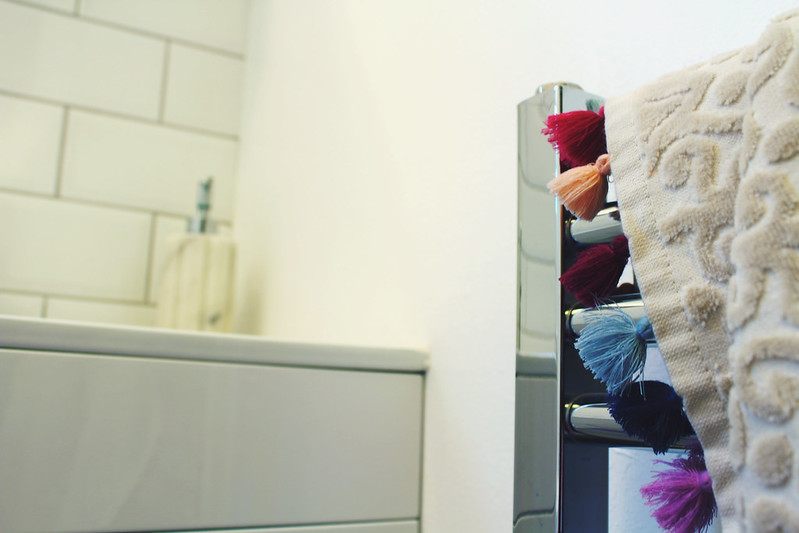 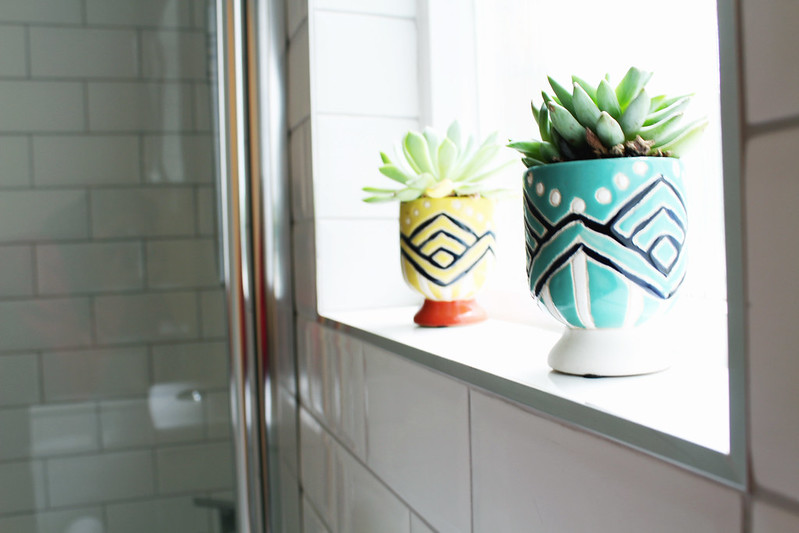 We have waterfall taps for both the sink and square ended bathtub, two shower heads-one of which is a wide rain shower head (probably my favourite bit) We installed a heated towel rail too instead of a radiator, so again that makes the room feel more spacious. The bathroom door was also switched around so that it swings out rather than in and the cabinet above and under the sink hides all of our toiletries so there’s no more clutter.

We got the bathtub, towel rail, glass panel, shower heads, toilet and taps from Bathrooms.com and the sink, it’s cabinet and the mirrored wall cabinet from Victoria Plumbing. The wood effect floor tiles and the metro tiles for the walls were all sourced from a tile shop near Holloway. Light grey grout was used for the metro tiles and dark grey for the floor. It looks tile heavy in the photos but the room itself is split even with tile vs wall- you just can’t see it from this angle. Awkward shaped room and all.

The succulents were the best spontaneous buy from Wilko’s (Wilko’s is the best!) and the pot plants are from Anthropologie for a bargain £6 each! The marble soap dispenser is from Zara Home as are the pom pom towels.

I plan to put up three little A5 sized frames with palm prints to introduce more colour into the room and there are some animal head hooks from Anthro that I keep meaning to pick up so we don’t have to hang our towels on the rail all the time.

It’s been so worth it and so nice sitting back in the new tub admiring all the new-ness. The dust and debris is a distant memory now and I’m already back to my Pinterest boards pinning ideas for a possible extension! If I can use a wobbly loo and bathe in plastic, I’m sure I can handle another build…right? 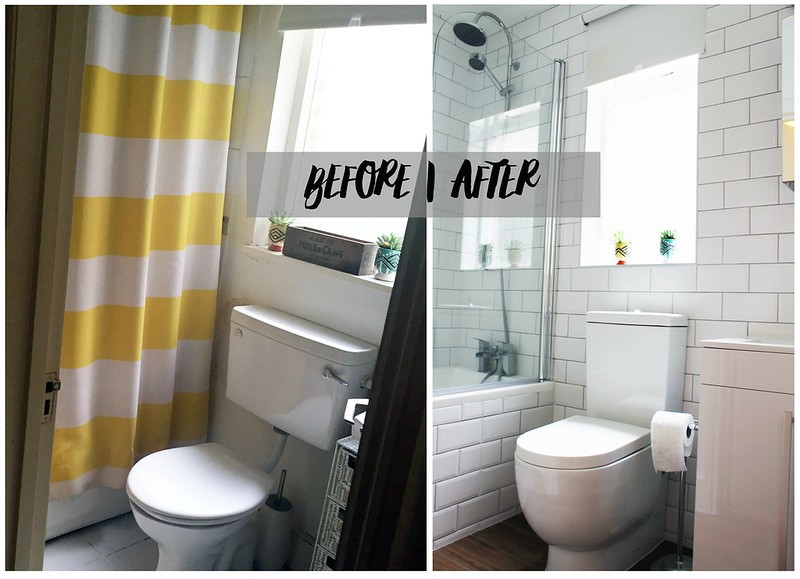 I look at the comparison and think so 🙂

27 thoughts on “New Bathroom Makeover! Before & After”