[dropcap]A[/dropcap] few years ago, jaded with the trials and tribulations of working in the television industry, I stumbled across a job vacancy on the Battersea Dogs & Cats Home website and with nothing to lose, I applied thinking I would never hear anything from it. To my surprise, two weeks later I was getting ready for an interview! I have always been animal crazy, since I was teeny tiny- in fact, my whole family are. Growing up we had cats, dogs, chickens, ducks (those, I wasn’t so crazy about) and even the odd monkey or two wandering into our back garden. Lucky for me, I got the office based job, said adios to the media world, and spent two wonderful years working in the country’s most well known animal shelter. 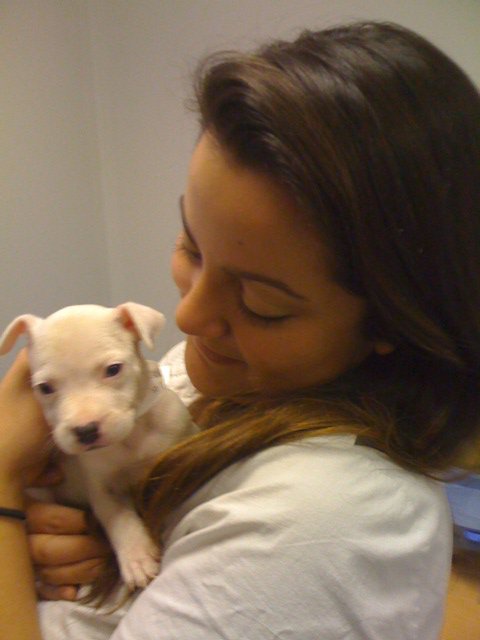 This little guy ( his name was Christopher) was one of many, many adorable puppies I got to coo over. I had never- and will probably never again- work in such an animal friendly environment. The offices were full of baby gates and dogs beds, acting as doggy day care for some of the more shy dogs from the kennels. Getting covered in doggy slobber was a daily occurrence and my Battersea fleece was usually covered in fur. It was a tough job keeping those kennels maintained, and to be honest it sometimes felt like a losing battle; the Home was enormous and I’d spend a lot of my time stomping from one end to the other, no matter the weather, sometimes hitching a ride on one of the green gators. Sometimes in winter the pipes would freeze, or the main jolly, the drains would always get blocked. Also, absolutely nothing but a hot shower and shampoo will rid the smell of an 8am kennel walk-through off from your hair.

For my last few months working at the Home, I called this listed building my office, and it was easily my favourite spot to work from. It was right next to the front gate where visitors walked in from and it was good to see all the coming and going on’s. One time, my friend Bud gave me a driving lesson in the staff car park- I was awful (and am still licenceless!) One of the perks of my job was access- I got to walk on the roof tops of the kennels, see the view from inside that clock tower, and speaking of views- I got to see this iconic landmark everyday:

Our office in the cute house in the middle of the Home, was also right outside the newly built Cattery, where there was a kitten room. Kittens for days. On days I was feeling overwhelmed or wanted a few minutes peace, I would disappear in here, sit on the floor and just let myself be trampled by kittens to cheer myself up. Did I want to take them home? Always. Any excuse, I would go into the cattery for a wander.

One of the perks for working at the Home, was getting involved and volunteering in any events. For both years I was there, I volunteered to take part in the Home’s float for the Pride parade. Every year was themed, and one time we went as Glee- I was Rachel Berry- and spent the hottest day of the year in knee high socks and a sweater vest, miming and dancing to “Don’t Stop Believing” on top of a float.

I wish I could tell you what this was for…knowing me, someone mentioned face paint and I was out the door signing up for it!

The final year I took part in Pride, our sound system failed, but we were in front of the British Airways float who had roped in Blue to be in their float. Shameless group photo with Duncan James!

It wasn’t always fun and cuddles though. I learnt so much in two years at Battersea about animal welfare, about the prejudice over Staffies, the sad or terrible stories of some of the animals that came through those gates. I love Staffies by the way, they were just always the most loving, goofy, sweet natured dogs. There was Sandy the Staffie that was so scared in kennels, but was the most affectionate sweet girl once inside the ‘safety’ of an office, the deaf Huskie puppy that was taught sign language, the Chihuahua puppy that was so tiny her foster mum fashioned a jumper out of a pair of knickers for her, and the one time I watched a chubby Golden Retriever walking down the fire escape of a kennel building, all by himself, and made his way towards the car park, like he just fancied popping out for a bit.

I also met some terrifying dogs, that had been bred for dog fights or some even the victims of dog fights, or some females that were just made to churn out litter after litter for puppies to sell. If it was hard for me to stomach the tales, I can’t even imagine what it must have been like for the staff that took care and were hands on with the animals. I’ve never come across a more passionate bunch since.

The Home doesn’t get any government funding at all and relies on public donations. Battersea Dogs & Cats Home has had a bit of publicity recently thanks to Paul O’Grady, but like I said, it wasn’t all cheery pip. I still have such love and admiration for Battersea Dogs & Cats Home; if you fancy a gander on their website or even want to learn more about donations, visit them here!

29 thoughts on “my time working at Battersea Cats & Dogs Home”