[dropcap]I[/dropcap]f I thought spending the morning at the Sky Garden was nice, having dinner as the sun set from up here was pretty amazing. We booked our reservation for 7:15pm at Fenchurch Seafood Bar & Grill-perfect timing for catching the orange and pink glow across the sky from the very top of the Sky Garden. The vibe on the 35th floor was polar opposite to the last time I had visited- music was pumping and people were lounging everywhere, drinks in hand. 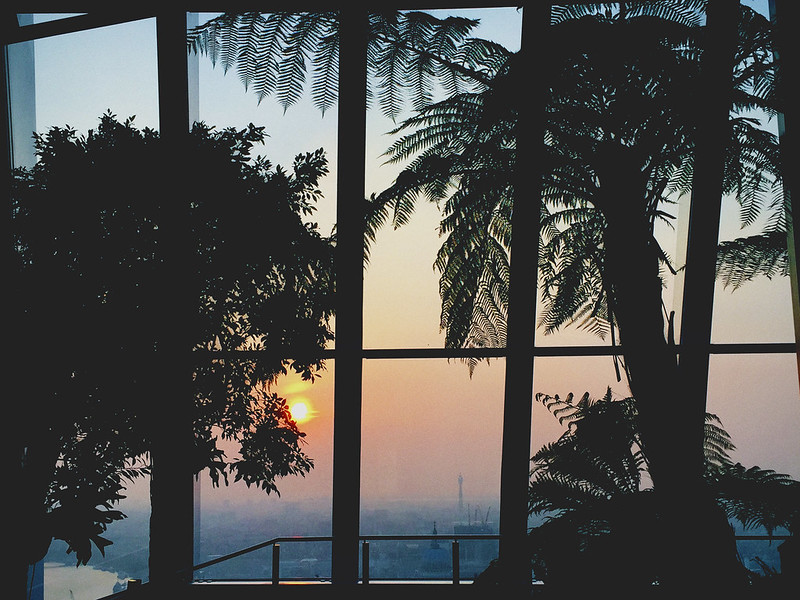 The terrace was already bathed in the last golden glow of the day- it was a beautiful sight. We headed straight to the restaurant, just up the steps along the garden path when Robin captured this beauty of a photo! 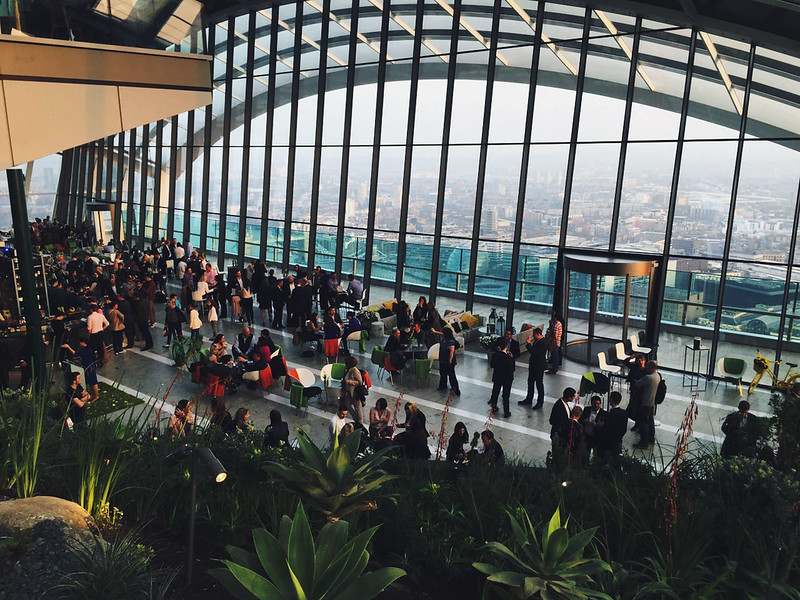 We got seated, ordered a couple of drinks and got stuck into the menu- I was starving! I had saved my appetite for this all day. You know you’re in for a good meal when even the bread basket and amuse bouche are delicious… 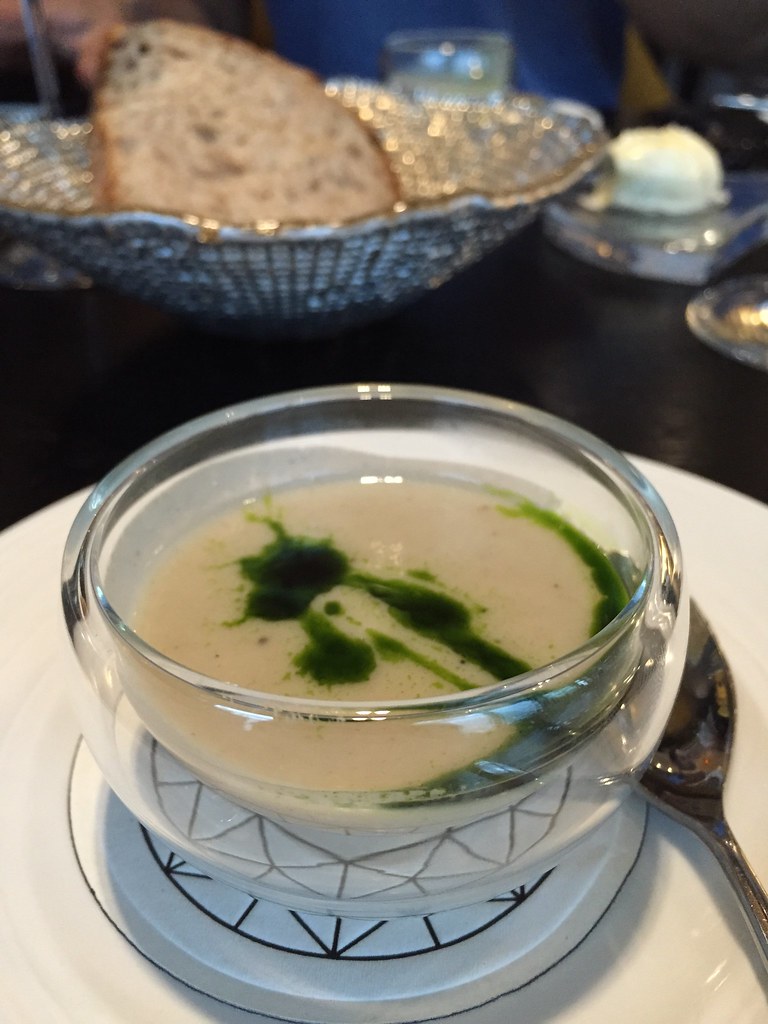 The tiny shot of artichoke soup topped with parsley oil was rich and earthy, kind of like mushroom soup. And parsley oil is a revelation! Where can I get some?

For my starter I chose the Rabbit ‘bolognese’… 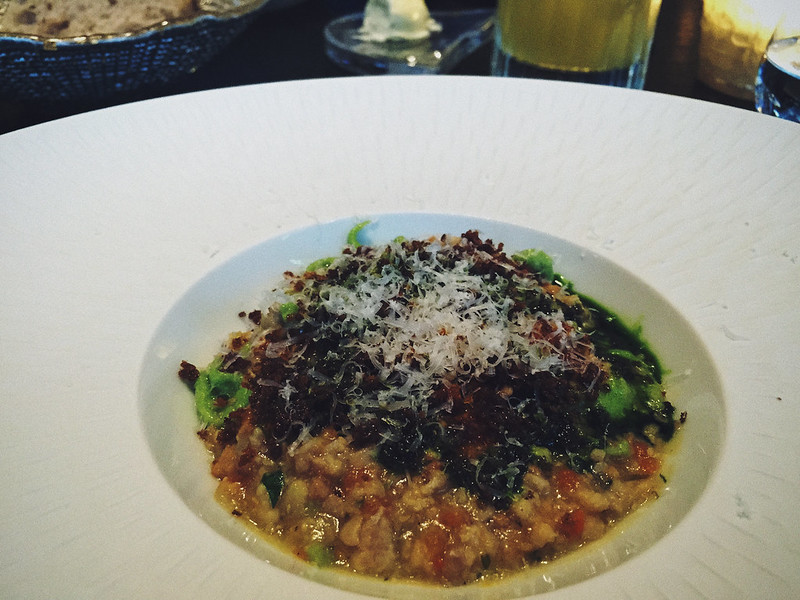 It was a good thing this was only a starter, as the small portion was more than enough. It was very rich and a light sprinkling of Berkswell cheese- made from unpasteurised sheep’s milk- and was adorned with a crunchy and garlicky topping.

Robin ordered the Tartare of Mackerel with cockles and oyster cream. It came served in a clamshell over a little bed of ice and seaweed- too pretty to eat…almost. 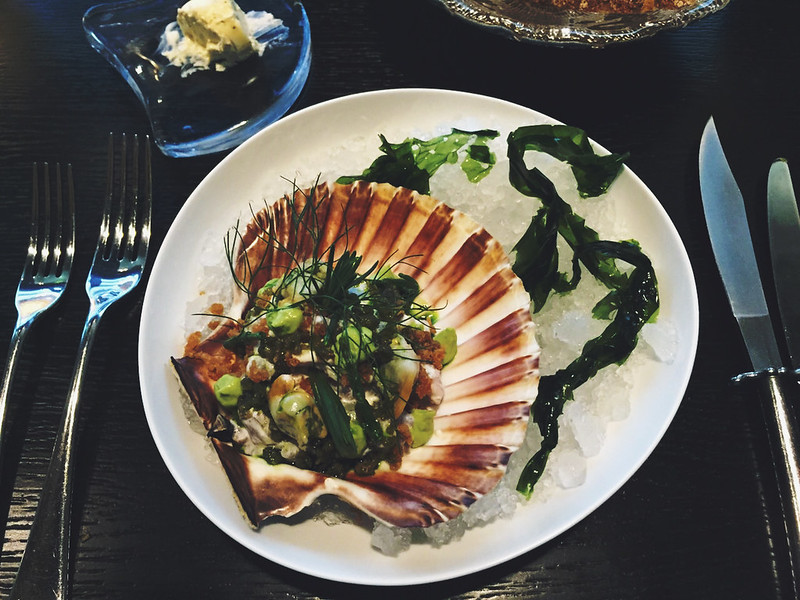 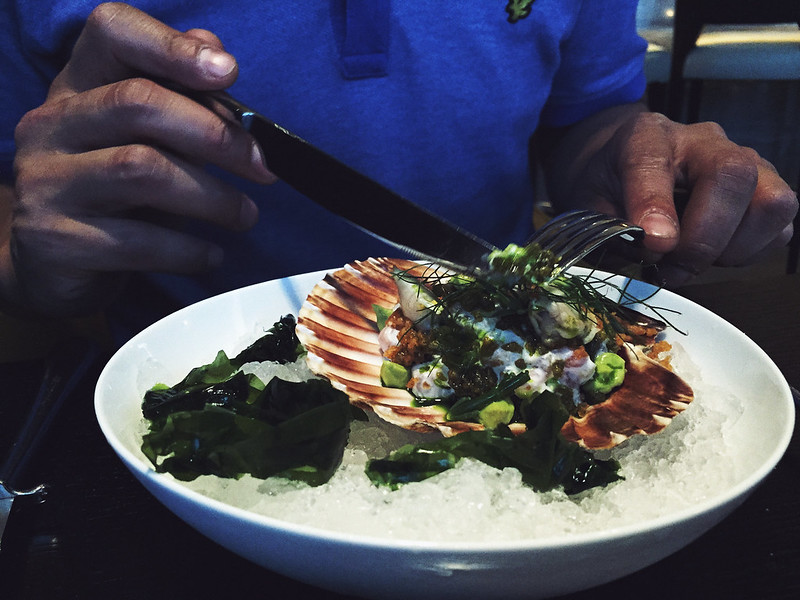 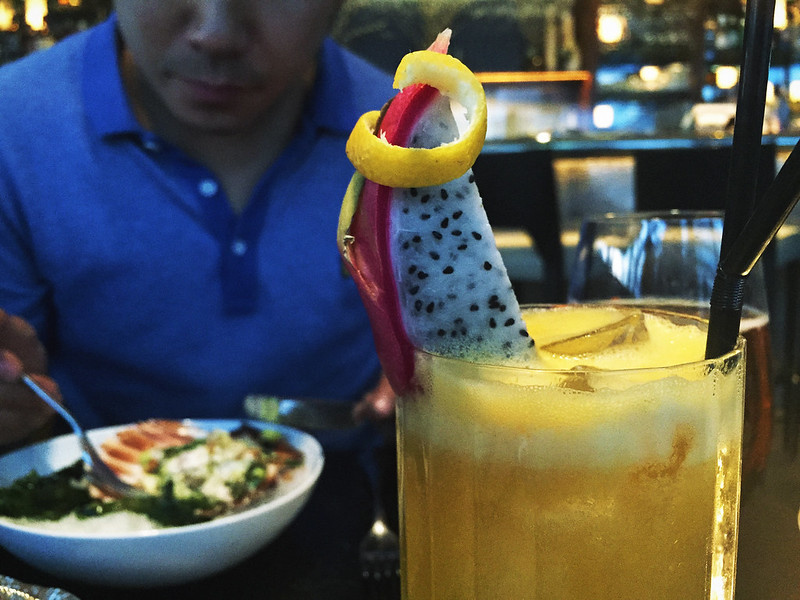 My cocktail came with the biggest piece of dragonfruit on the side and for once I didn’t eat the garnish as dragonfruit actually tastes of nothing. Exotic name, zero taste. This particular cocktail was a Fenchurch Fizz, with apple liqueur, vodka, passionfruit and I *think* pineapple. Basically, fruity and not overly sweet-just the way I like them.

For dinner, we both wanted something from the Grill. I got the Carabinero Prawns and Robin the Fillet steak and both came with thick, triple cooked chips. 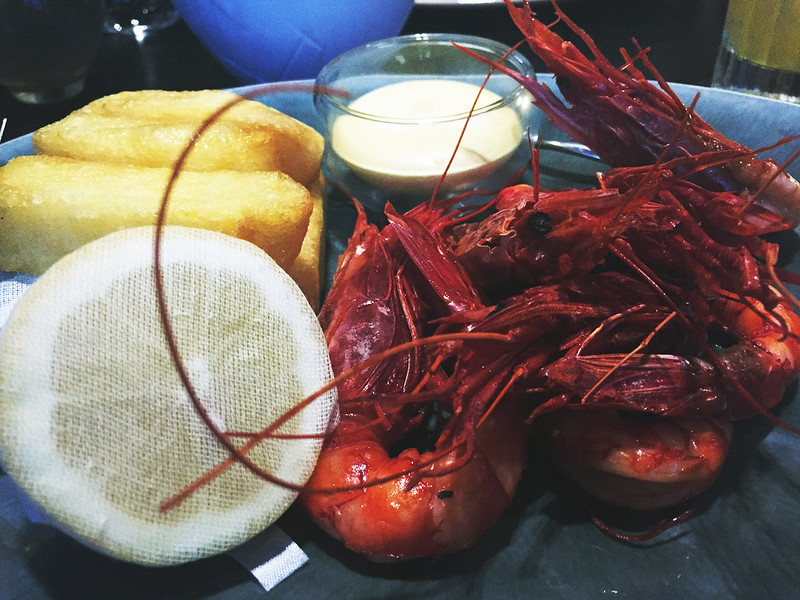 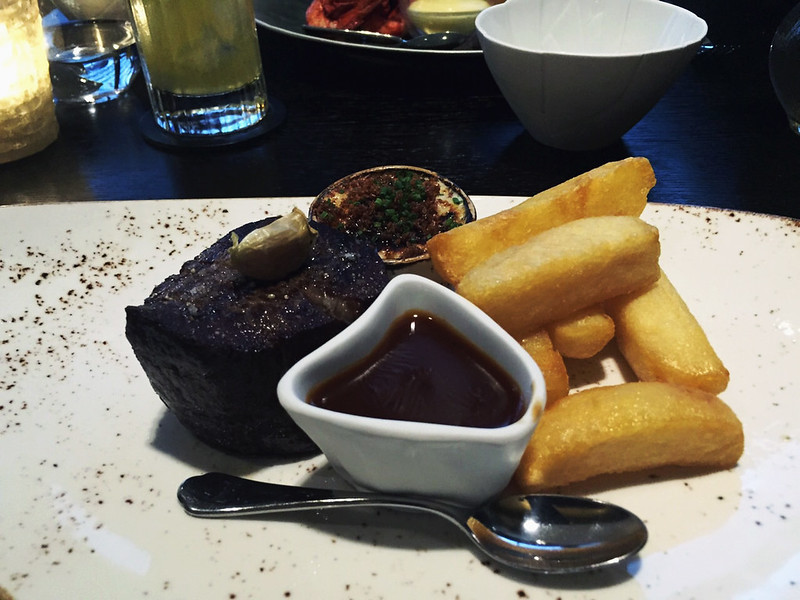 My prawns were so delicious. I couldn’t fault their taste but…there’s a but. I was expecting them to be bigger…when I googled the dish I thought the prawns would be double the size like the ones I had seen in my Google Image search. However, would I order it again? Yes, probably!

The chips were wonderfully crispy on the outside and very fluffy on the inside but they were so big they could have been wedges instead. That’s just me nitpicking though, as overall, my dinner was lovely.

Robin’s fillet steak, that I stole more than few bites of, was tender and the peppercorn sauce it came with packed a nice punch. I jealously looked at his portion of truffle mac and cheese that came with it and wished I had gotten the same!

And then came my favourite part of every meal! Dessert… 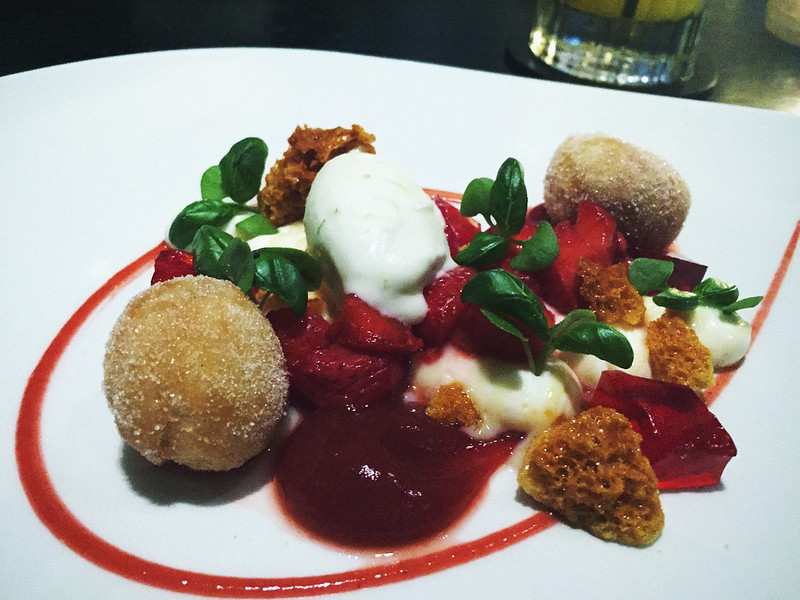 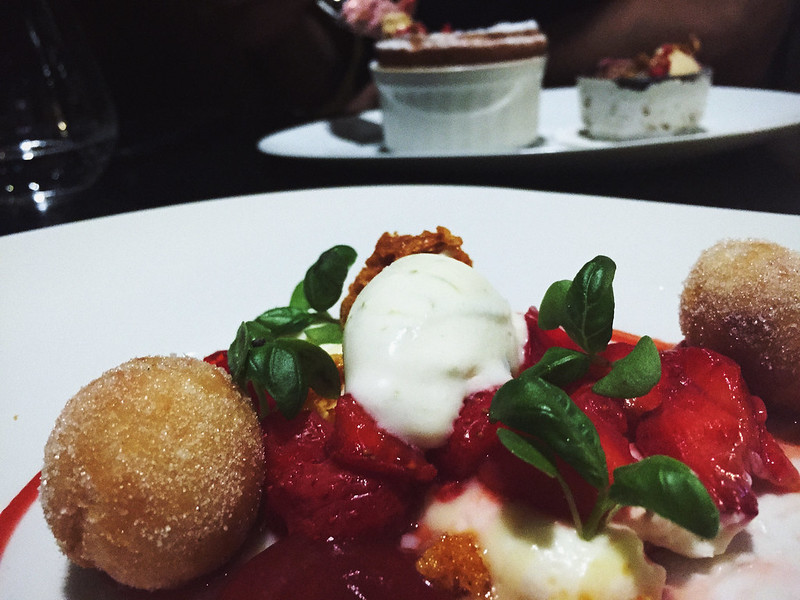 Strawberry doughnuts for me! It was like having a deconstructed doughnut on a plate. There were little cubes of strawberry jelly with pieces of honeycomb and sliced strawberries sprinkled all over. A couple of bite sized doughnut pieces adorned the sides of my plate and thrown into the middle was a scoop of lime ice cream and buttermilk. So. Good.

I feel like if our meal order was a game, then Robin would have won by miles. Everything he chose looked amazing and made me seond guess what I had picked. For his dessert, he got the Raspberry Souffle with whiskey and oat ice cream. I took a bite and it was like Christmas in my mouth. The flavours were so fruity and almost spicy and I loved it. Again- jealous. 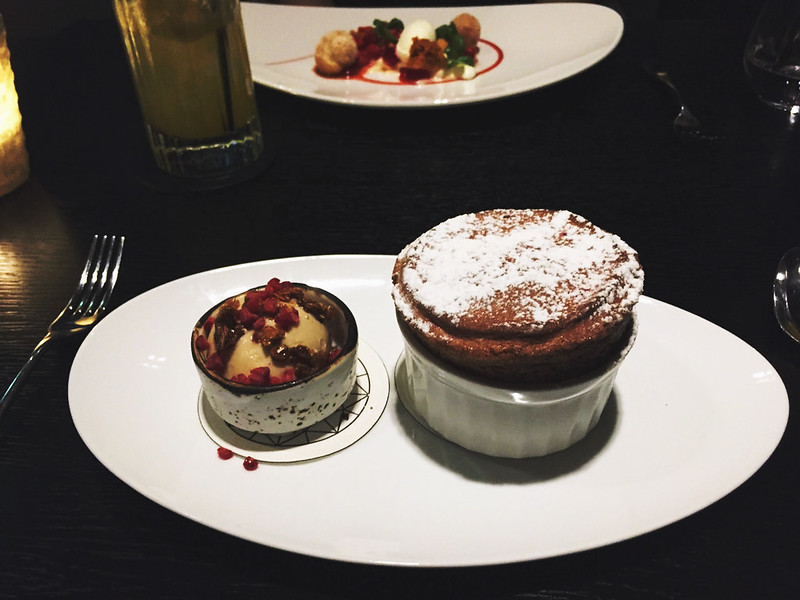 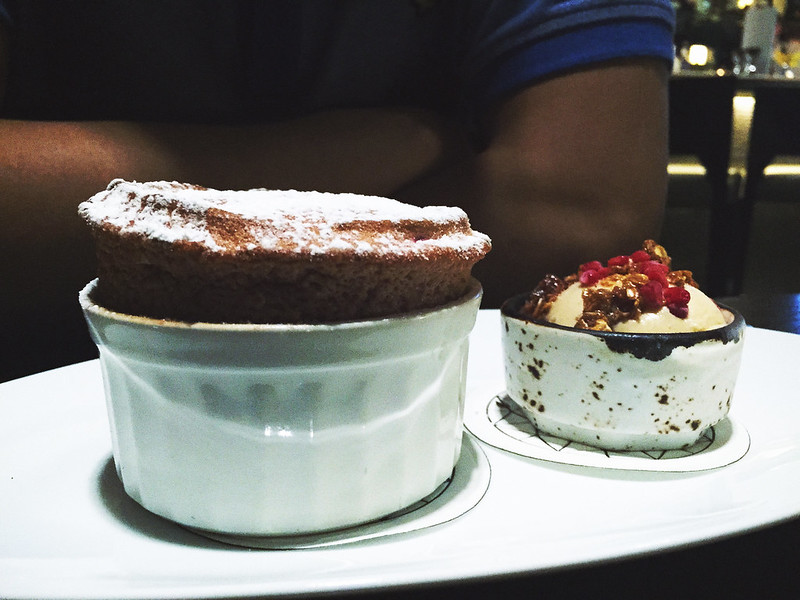 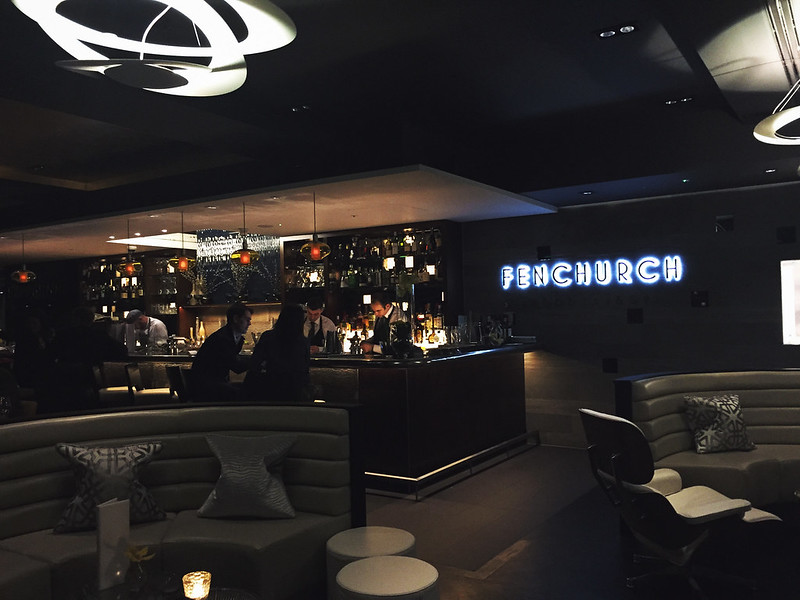 By the time we finished our meal, the sun was well and truly down and the city lights below were twinkling. There is a huge terrace overlooking down into the Sky Garden atrium…if you don’t have a head for heights, don’t look down! 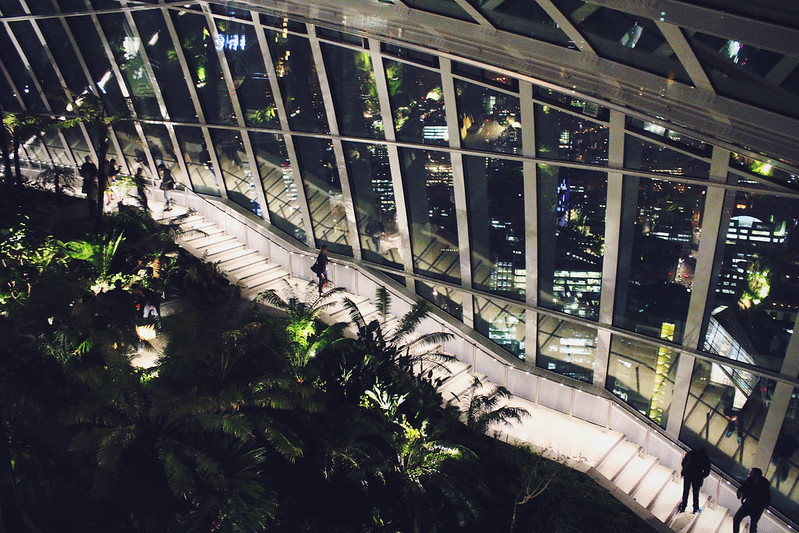 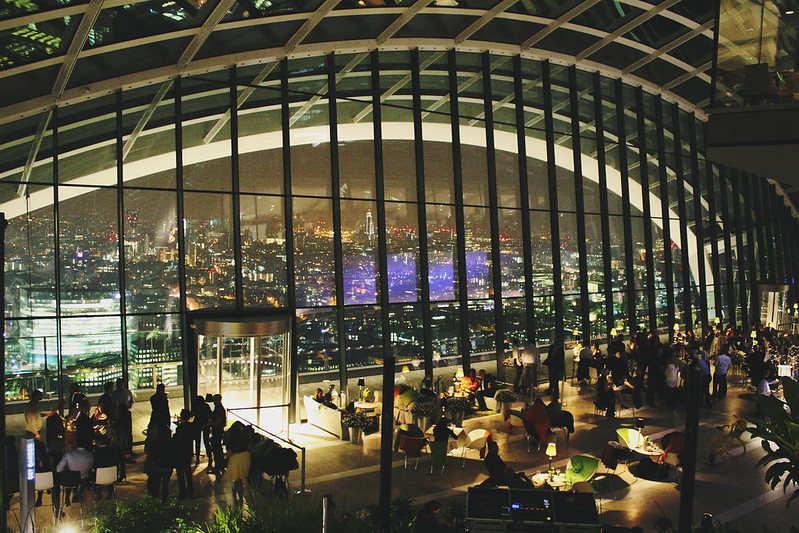 We wound down after our meal wandering the different terraces and gardens. I couldn’t help but notice that this place was a popular date night spot- SO many couples! And it’s no suprise. Drinks and that view can’t be beat. 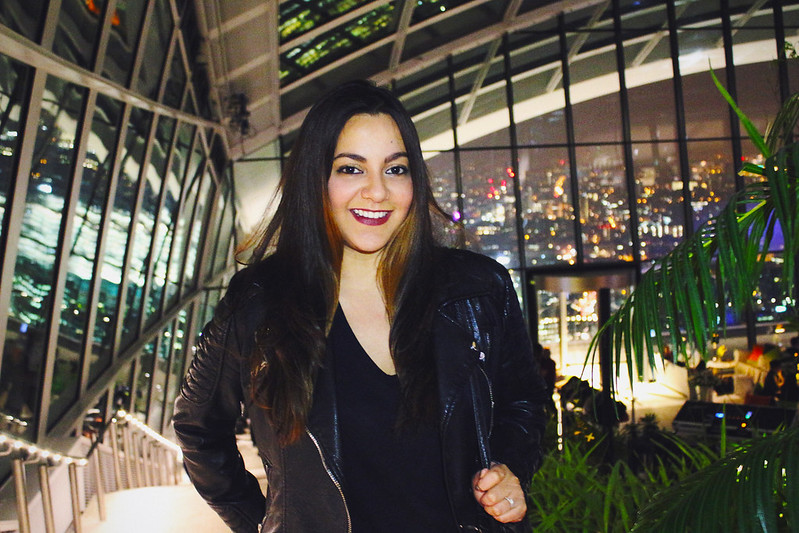 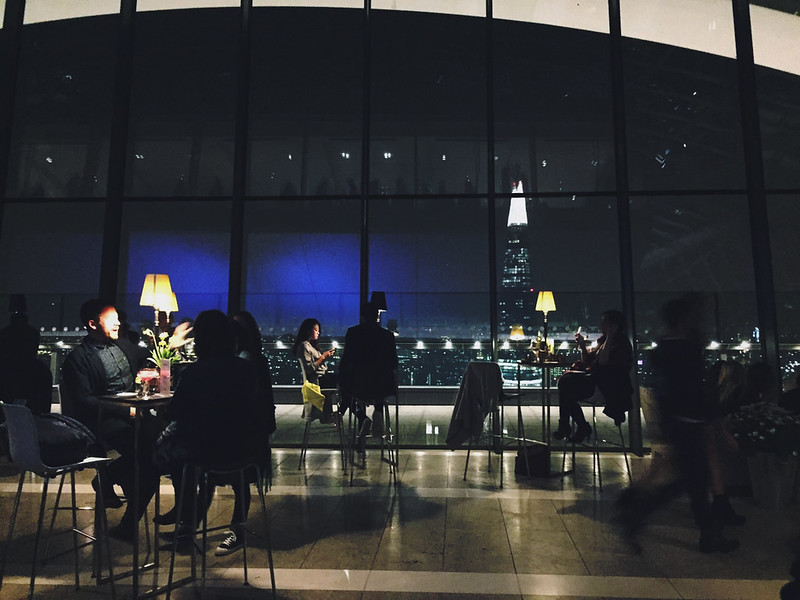 We then zipped back down to ground level in the lift- ear poppingly fast- and took off into the night to meet friends for a drink. 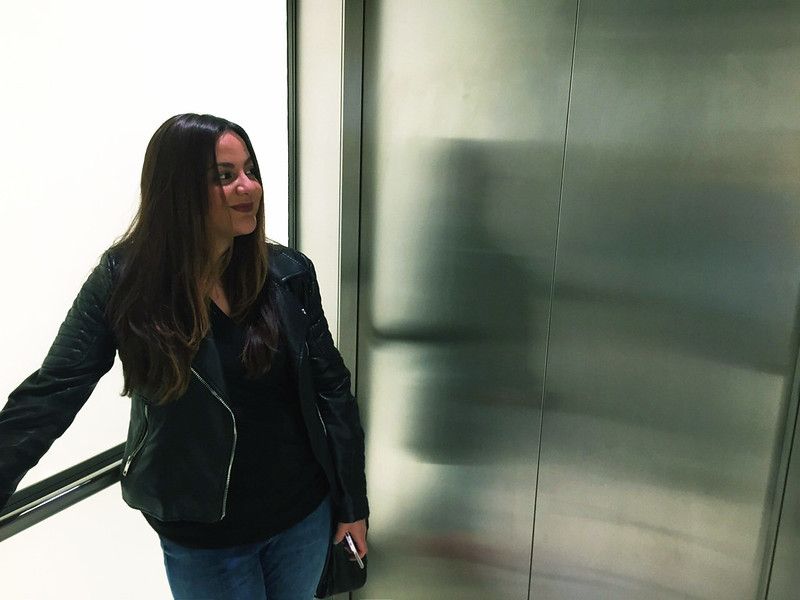 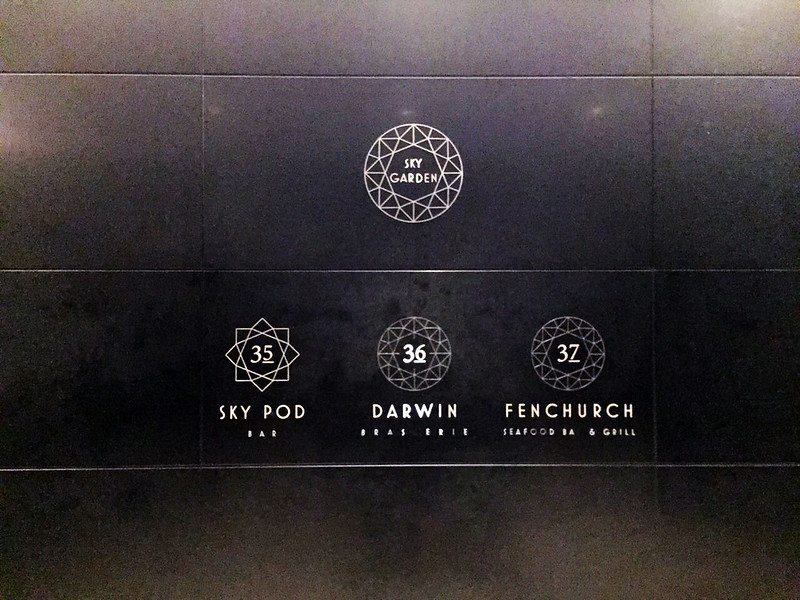 It was a lovely date night- that and coupled with seeing an old friend later-made it all extra special! Small tip- arrive a few minutes earlier before your restaurant reservation as you still have to queue through security check before you go up into the lift- bit of a mood killer, but the sunset makes it all worthwhile!

20 thoughts on “Sunset views at the Fenchurch Seafood Bar & Grill”