[dropcap]I [/dropcap]love the feeling you get when you discover or are introduced to music that you really like, that fits right into your playlist like it always belonged there. This is what happened when I was introduced to Broken Anchor recently. It’s the first time that singer & songwriter, Austin Hartley-Leonard, has been to the UK, to play a series of intimate Living Room gigs around the country. Based in LA, Austin has written songs for hit shows like Chuck, Private Practice and Hart of Dixie. I caught up with him at Wilton Music Hall to shoot the breeze and find out more about his journey to London… 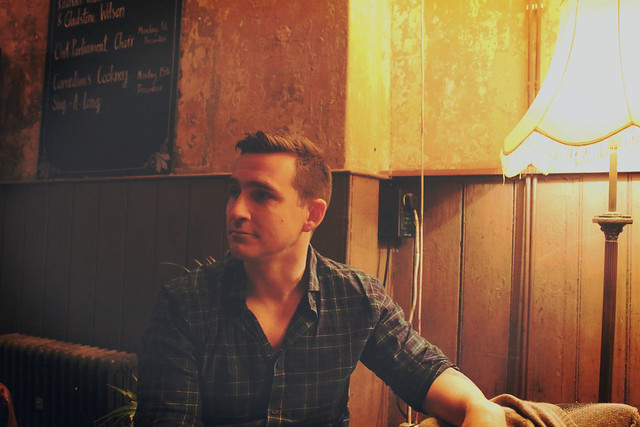 How come you decided to come to the UK?

So….I was playing a show in San Diego with a band called Scars on 45, and it was at San Diego Aquarium, pretty random gig. I play guitar for Scars and spent the summer opening for them as well. So after the show, I’m in the parking lot and this woman named Abi comes up to me, and says “I don’t know Scars on 45 are, but you’re Broken Anchor right?” I said yes and she says “ I was turned onto your music by Brian Wright” (Brian Wright is a friend of mine who is a brilliant songwriter). I play at the Hotel Cafe in Los Angeles and it turns out she helped promote a show for the Hotel Cafe Tour. She’d also set up a few house concerts around England for some friends of mine. So I immediately was like “well, I would love to play some house concerts in the UK.” She told me to email her, which I did, never expecting to hear back from her….and a month later, I had 10 shows booked around England. It was pretty incredible. All from meeting her in a parking lot in San Diego.

How did the living room gigs come about?

The UK is notoriously a kind of hard market to crack for an unknown artist, ‘cuz, ya know, so many people come over here, have to rent a van, rent gear, pay for hotels…and then….did you pick the right club? Is the promoter worth his shit? Is it on a good night or is it a night you’re following karaeoke or opening for trivia? You know what I’m saying? And I think once the ball starts rolling in the UK, it can roll really fast, but I getting it going is difficult so the idea of going into someone’s living room, playing to fifteen of their friends, and over the course of a week playing to 250 people… it’s the greatest thing you can do. And its not as common here, so people don’t really know what to expect. But you kind of get to tell stories and shoot the shit, they can to you, ask questions about the songs if they want, it’s fun, it’s totally hands on.

yeah, and people that like the songs! For me as a songwriter and not having a band, for me to go to a pub, and start finger picking and start singing about my breakup, like, it just doesn’t work.

I also feel like a lot of American bands come over and they crack England, and it follows on- success in America. Like the Gaslight Anthem, I remember going to their gigs and the tickets would cost a fiver, and now they’re playing tonight at Ally Pally which is a huge venue

…they are awesome, love that band

I feel like you’ve got a lot of reverb in your songs, and that was something that I really liked about them too…

Slapback! That’s what they use a lot….a lot of slapback delay. So now you know a little more! If you ever meet them tell ‘em you dig all the slapback (laughs)

Would you prefer touring as part of a band or do you like being solo?

With a band, it’s certainly less intimidating, you know what I mean? It’s nice to have people you know around you. I came over here to stay with someone that I had met for a combined 30 minutes. So that had the potential to be weird. And when you’re solo, it’s sort of like, you’re jetlagged, and you’re in a new country, and you’re by yourself, and all you have is a guitar, and then going into people’s homes to sing for them, you’re not even on a mutual turf you know? So I found myself being more nervous about these gigs than I intended.

…because they’re so intimate and maybe out of your comfort zone?

Yeah definitely. And I feel a little weird saying that. But the other thing is you can’t let it be awkward, because it’s your job to be entertaining and can crack an occasional joke and engage with the audience. You want these people to have a good time. You want them to like the songs and to have an experience with the music and with the performer. And back to your original-20-minutes-ago question, touring by yourself… if I had one guy with me, if I had my best friend Matt that I used to play with, if he was here playing and singing with me, I think it would be easier. You know, there’s someone you kind of lean on…a little less “fish-out-of-water.”

Which song are you most proud of?

-long pause- as Austin thinks about it-

is that like trying to pick your favourite child?

No, I’m just trying to think if I’m proud of any of my songs!

You do? Well thank you. The whole Broken Anchor thing came about because a couple of years ago, like three or four years ago, my life was sort of like pretty, umm…

Yeah. It was getting to a place like just some shit had happened and I was not being very kind to my body, you know what I mean? I was hitting it pretty hard, and so I started taking a bunch of steps to like clean up and ended up getting sober. After I got sober, I really did not have any attachment to any of the music I had written up to that point, I didn’t really feel it. And so at that point, I was right off my 30th birthday, had been in LA for six years trying to make a name for myself, and I had no songs. Pretty scary.

The first song that I ended up writing after that was “Broken Anchor Blues” and it absolutely pointed to the direction that Broken Anchor would eventually be. So “Broken Anchor Blues” – pretty proud of that one. I remember the first time hearing “Leave the Light On,” I got chills. Same with the song “Always,” because I hadn’t before done a big rock chorus.

With Leave the Light On, the start of it just had kind of a Ronettes feel to it?

I didn’t try to make it sound like anything, I wasn’t thinking oh I should give this a Ronettes feel, it just happened. It’s the best way you can kind of do it I think.

Who or what would you say was your biggest musical influence?

I really like Wilco, I always have. There’s a band called Naked Ray Gun that I really liked, and The Pixies. I really loved bands but of course I went through what every songwriter does, a big ‘ol Ryan Adams phase. Large one! Really got into him. For a couple of years there, that was what I wanted to do. I chased that down the wrong path, I thought “oh wait, he gets wasted in the East Village and like chases women and plays the acoustic guitar, I’m gonna do that!” And I ended up just being like sort of overweight and getting slapped in the face a lot!

So do you think now that you’ve been here, you’ll go back home and start song writing, is there something you’d take from being in England that would inspire you? Like your song Canada for instance? Would we have England somewhere in the future?

Now that you’ve asked me for it, I can make that happen, if you want to commission that (laughs). I don’t try to write songs about anything. My songwriting, it’ll happen when I’m sleeping and I’ll wake up with something or I’ll hear something in my head, sit down and just sing dummy lyrics until I like something. One of those dummy lyrics, like “Canada” will stick, and I’ll think “How do I fit a story around this?” So hopefully something from this trip will come through.

I’ll keep an ear out

You will be the first person to know.

Ok, lastly, if you could collaborate with anyone- dead or alive- who would it be?

So that was more than 5 questions, but isn’t that always the case when you end up talking about something you really enjoy?

The album, Fresh Lemonade, is available to purchase on iTunes. You can preview it below!

2 thoughts on “5 Questions with Broken Anchor”