There’s only so much home improvement you can do…we have been talking about gutting our bathroom and installing a new one since we moved in, but there’s always something else that our time (and budget!) gets spent on instead. I have regrouted this room more times than I can count- the walls, the ceiling, the window sills have all been given a new lick of paint.  I’ve even attacked the grout between the floor tiles (grout pens- BEST invention ever) but until the day we actually take the plunge with a brand new fit out- I’ll make do with the little things to cheer it, and myself, up.

I can’t remember how I stumbled on Deny Designs, but I’m so glad I did! It’s a never ending source of home accessories and furnishings designed by a vast team of artists. Including shower curtains! A simple shower curtain can transform your bathroom. I spent days going through their infinite catalogue searching for a design that was The One. Just when my eyeballs couldn’t take anymore, this one loaded onto my screen and I knew this was heading straight to the checkout!

This one is a design from Geronimo Studio and is the Amazonia Grey print. I can’t decide if it’s the deer and it’s antlers or the toucan bird that made me pick this out- either way, I love it. Our bathroom is t i n y and an awkward L shape-getting a before and after shot involved alot of twisting and turning but I managed to get 2 decent-ish photos. Here’s the Before… 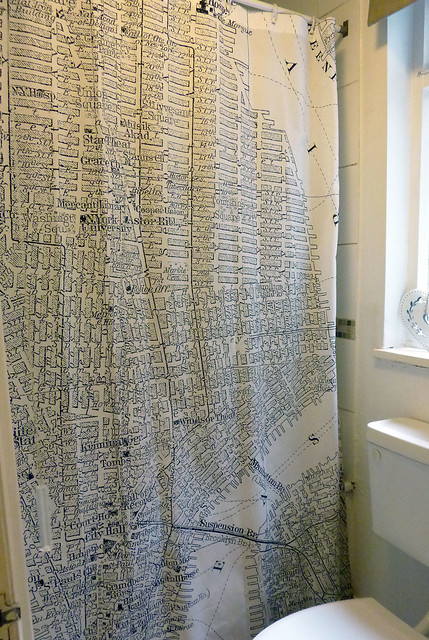 …and here’s the After: 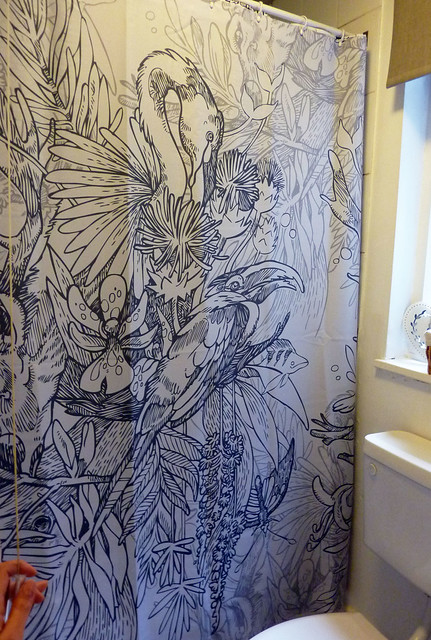 The old curtain was only ever a temporary answer until I found something I really liked- it was just a cheapie from H&M homeware…it went pink at the bottom within weeks and no amount of Cillit Bang could get it out (anyone have tips on that by the way?) I’ve got a shower liner to protect the new one. The only bug bear I have is that the curtain doesn’t have the circular rings for the shower hooks- just slits. Is that an American thing? It took a bit of fiddling to get my current shower hooks into the new curtain, but really it wasn’t a big deal.

I even considered having this print on a duvet instead, but I stuck to my guns and decided the shower curtain took precedent. That’s what I loved about Deny, if you loved a print, it could be applied to anything:

They ship all over the world. I was lucky to have caught the last day of a 25% off deal, but I would have paid full price as I really wanted that print. I chose the standard shipping and DHL delivered it to me pretty much exactly 1 week after I placed my order- not bad!